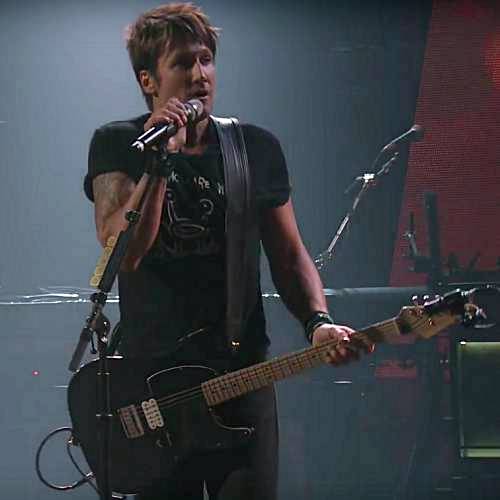 The track features on the country singer’s upcoming LP, ‘The Speed of Now Part 1’, which is set for release on September 18, and he was completely blown away by the ‘Trouble’ hitmaker’s vocals.

He told ET Canada: “I don’t know who surprised me the most.

“Obviously someone like Pink, I mean good lord. Hearing her voice on the song ‘One Too Many,’ man it was unbelievable.

That is an astounding, astounding gift that she has. And again, her as a person, it’s also why she’s been around a long time. She’s absolutely astounding and it was great to get to do that with her.”

Pink is no stranger to collaborating on the country music scene, having previously joined forces with the likes of Kenny Chesney and Chris Stapleton.

Keith has also teamed up with rising star Breland and music legend Nile Rodgers on the song ‘Out of the Cage’, and he and fellow country singer Eric Church have collaborated on his album’s final track, ‘We Were’
.
On what he looks for in a duet partner, Keith – who is nominated for three prizes at The Country Music Association Awards (CMA Awards) this November – recently explained: “When I collaborate, I’m always looking for that ‘third thing’.

“There’s what I do, there’s what my collaborator does, and then there’s this ‘third thing’ that I’m most curious about.
“That’s what interests me the most – when the sum of the parts becomes even more than what I envisioned. That’s what I love so much about it – finding common ground, shaping it and bringing it together.”

‘The Speed of Now Part 1’ is the Grammy-winner’s 12th studio album.

He said: “In October 2019 this album title came to me. I liked it because I felt like life was flying by so fast. But music (for me) has always been the place where it slows down and doesn’t even exist. I would never have imagined that, in 2020, this album title would take on a whole new meaning.”

End Of The Road festival has announced over 100 names for its 2021 line-up. The Dorset festival cancelled its 2020 edition back in May due to...
Read more

The actress says the Recording Academy expected her to take on the role without compensation and wouldn't cover hair, makeup and wardrobe either.Tiffany Haddish says...
Read more

Doja Cat sent a string of voice messages to Australian guitarist Plini to apologise after using a snippet of his song in her recent...
Read more

Troye Sivan has finally delivered his single ‘Easy’ with Mark Ronson and Kacey Musgraves, almost a month after he first teased the collaboration. The song...
Read more
- Advertisement -