The daily rise announced by the Health Ministry brought the total number of the central European country’s infections to 32,413.

The Czech government on Thursday ordered people to wear face masks inside buildings as the daily new case count topped 1,000 for the first time, but has so far opted to avoid bringing back other tough measures that would hurt businesses.

Hungary will not impose blanket school closures to curb the spread of the coronavirus but will aim to protect the most vulnerable elderly as the main goal is to keep the economy going, Prime Minister Viktor Orban said on state radio.

Orban said that a mandatory wearing of masks on public transport must be enforced.

He also said the Visegrad states of the EU – Hungary, Slovakia, the Czech Republic and Poland — will coordinate their measures to fight the second wave of the pandemic. Premiers of the four states will meet in Poland later in the day. 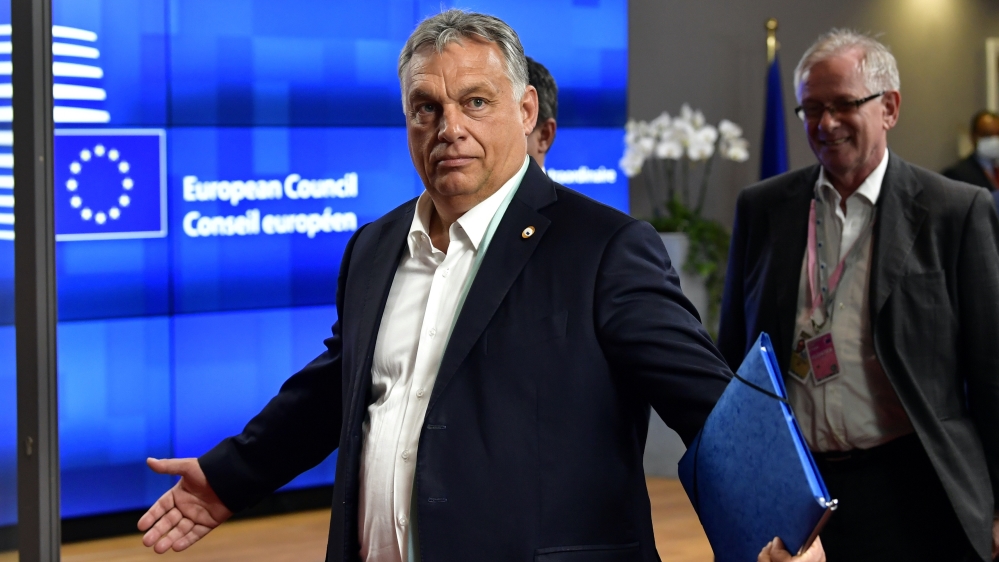 Orban says that a mandatory wearing of masks on public transport will be enforced [File:Reuters]

Ukraine registered a record 3,144 new cases of the novel coronavirus in the past 24 hours, the national security council said, up from a previous record of 2,836 registered on September 5.

Hello, this is Umut Uras in Doha taking over from my colleague Zaheena Rasheed.

India’s health ministry has asked states to allow coronavirus testing on demand without a doctor’s prescription as the country logged another record jump in daily cases.

It also said some negative rapid antigen tests should be redone through the more reliable RT-PCR method, the gold standard of coronavirus tests that looks for the genetic code of the virus.

The retesting order applied to people who had negative results but had fever, coughing or breathlessness, or people who developed those COVID-19 symptoms within three days of their negative test results.

India reported another record daily jump of 96,551 coronavirus cases on Friday, taking its caseload to 4.5 million.

“Traditionally TRC is played as an international, cross-border series of home and away matches between Argentina, Australia, New Zealand and South Africa but due to the pandemic this is obviously not possible this year,” SANZAAR Chief Executive Andy Marinos said.

“We have, therefore, worked very hard as a group to ensure TRC takes place this year, albeit in one country, and SANZAAR was meticulous in assessing the two options for hosting presented to it by New Zealand Rugby and Rugby Australia.”

Mainland China reported 15 new coronavirus cases at the end of Thursday, up from seven cases a day earlier.

The National Health Commission said in a statement all of the cases were imported infections involving travellers from overseas, marking the 26th straight day of no local infections.

Kosovo’s government is letting in the media into previously sealed hospital wards to film the suffering of coronavirus patients after a new poll showed that a third of the population believe the pandemic is a pure hoax, the AFP news agency reported.

“Tell those outside who don’t believe what you saw here,” an exhausted elderly man, recovering at the infectious disease clinic after a two-week battle with the respiratory disease, told a local TV channel.

“Don’t joke with this. How can anyone believe a lie that the virus does not exist?” he implored.

Kosovo had its deadliest month yet in August with nearly 300 deaths – a toll higher than all the three prior months combined.

South Korea posted 176 new coronavirus cases on Friday, a slight increase from the 156 and 155 cases reported on Wednesday and Thursday, respectively.

Seoul is battling a fresh wave of infections that erupted at a church and drove the country’s daily tally to 441 in August.

The numbers have steadily dropped since the government imposed strict social distancing rules, but Prime Minister Chung Sye-kyun said the consistent outbreaks are deepening concerns whether the government should extend or ease the curbs, including an unprecedented ban on nightly on-site dining in the greater Seoul area, due on Sunday.

“It would be right to lift the restrictions, considering the sacrifices the people are making, but we’re as much worried if any hasty easing would lead to a respread of the virus and cause even greater pain for the public,” Chung told a meeting. 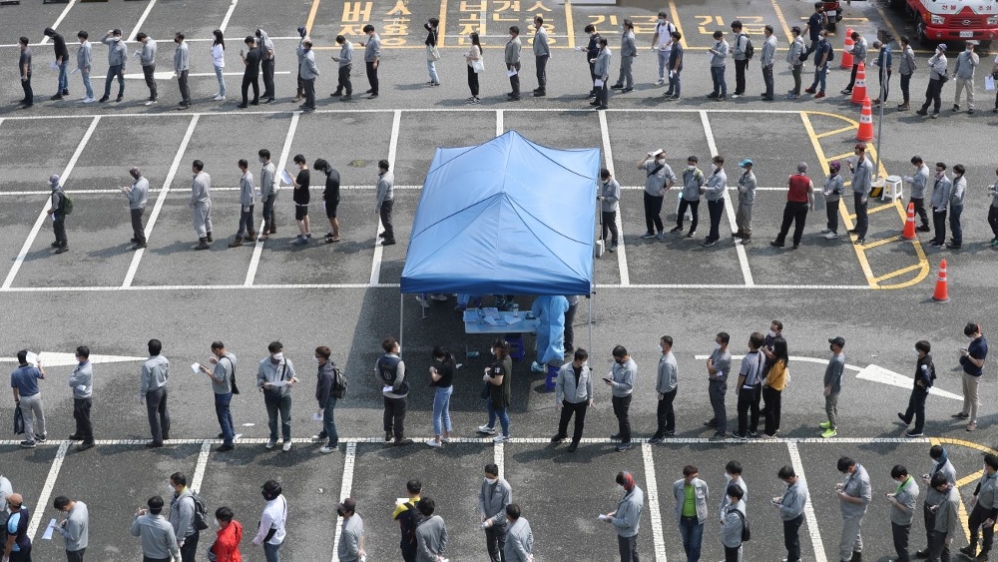 Hyundai Heavy Industries employees wait in line to take tests for the COVID-19 coronavirus at a virus testing station in the southeastern port city of Ulsan on September 9, 2020 [Yonhap/ AFP]

Daniel Andrews, the premier of Australia’s Victoria, said a curfew imposed to contain the state’s coronavirus outbreak will remain in place as health officials reported 43 new cases and nine deaths in the last 24 hours.

“The curfew position at the moment will not be changing. Because it is working,” he told reporters, dismissing claims the lockdown violated human rights.

A flare-up in cases forced the Victoria government to put the state into a hard lockdown in early August. But it has helped to bring down the daily rise in infections to double digits in recent days after it touched highs of more than 700.

A domestic flight ban came into effect in Myanmar on Friday, with Myanmar National Airlines, Air KBZ, Air Thanlwin and other airlines announcing the suspension of their services, many for at least two weeks.

Some 21 Yangon townships were also under stay-at-home order after authorities recorded 120 new cases and two deaths on Thursday.

Scammers have stolen $70m from a programme supporting US businesses hurt by the coronavirus downturn, leading to charges against 57 people including an NFL player, the Justice Department said.

Brian C Rabbitt, an acting assistant attorney general for the criminal division, told reporters the alleged fraudsters tried to get hold of more than $175m from the Paycheck Protection Program (PPP). Of the $70m that was stolen, the government has recovered or frozen $30m.

“The amount of fraud that we’ve uncovered to date and that we’ve prosecuted to date is significant,” Rabbitt said. “Given what we’ve seen so far, we believe that there is an additional set of fraudulent activity out there that we intend to continue pursuing.”

Maria Orozco, Colombia’s transport minister, said international flights to and out of the country will begin gradually, starting on September 21, following a six-month hiatus to contain the spread of coronavirus.

The health ministry is drawing up security protocols that include requiring travellers to take coronavirus tests and for their results to be negative, Orozco said.

The resumption of international flights will depend on destination countries, airport capacity and the interest of the airlines, she added.

Quebec, Canada’s second-most-populous province, will fine anyone who does not wear a mask in an enclosed public space amid an uptick in new coronavirus cases.

“We cannot accept that a few irresponsible individuals are putting our entire society at risk. So, I think it’s time to crack down,” Quebec Premier Francois Legault told a news conference.

The new measures will come into effect on Saturday. The amounts are yet to be announced.

The number of confirmed coronavirus infections topped eight million in Latin America, the region with the most infections in the world, though there were indications the spread of the virus was slowing in some countries.

During the past week, the daily average of cases in the region fell to 67,173 through Wednesday from 80,512 in the previous seven days, according to a tally by the Reuters News Agency.

Brazil, suffering the worst outbreak in the region, stayed atop the Latin American tables for coronavirus cases and deaths, recording a total of 4.2 million infections and more than 128,000 deaths. Still, Brazilian officials noted a decrease in infections in recent days.

The average number of cases also fell slightly in Peru, Colombia and Mexico, the countries with the most infections after Brazil.

The Brazilian state of Bahia signed an agreement to conduct phase-three clinical trials for Russia’s Sputnik V vaccine against COVID-19 and plans to buy 50 million doses to market in Brazil, officials said.

Governor Rui Costa said a confidentiality agreement was signed on Tuesday to undertake the trials and Bahia will receive an initial 500 doses as soon as Brazil’s health regulator Anvisa approves the protocol for testing.

If the trials that are expected to start in October are successful, Bahia will look to market the Russian vaccine in Brazil through its pharmaceutical research centre Bahiafarma, the state’s health secretary Fabio Vilas-Boas said in a statement.

For all the key developments from yesterday, September 10, go here.