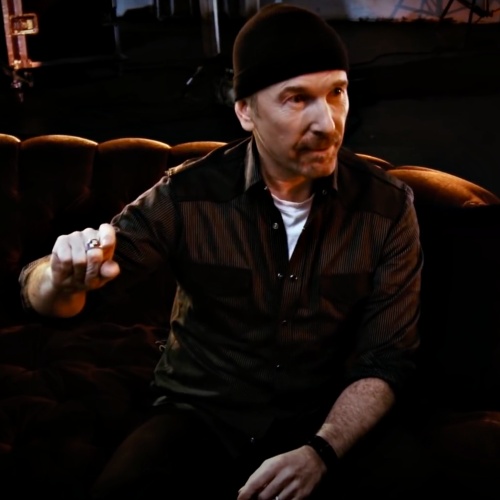 The ‘Beautiful Day’ group’s guitarist, The Edge, has revealed he and frontman Bono were in their native Dublin working on new material before they went their separate ways during the lockdown period.

However, the musician was fortunate enough to make it back to Ireland after spending quarantine with his wife Morleigh in California.

Speaking to Jo Whiley on BBC Radio 2, he said: “I was actually working on some new songs with Bono and … I had a decision, am I going to go to Dublin or am I going to head to California where my wife was so I opted to head for the wife which I think was the right call, ‘cause literally within two days they’d shut all flights into America so I snuck in and spent the first part of the lockdown with Morleigh in California and then came to Dublin for early May and was in Dublin for a while … I felt very fortunate … overall I felt like one of the really lucky ones.”

The band have been using Zoom to keep in contact amid the pandemic, which has proved “challenging”.

The Edge quipped: “I’m known as the technology genius, but basically that’s because I know how to fix the printer. That’s about the extent of my technology skills, but to say that sets me on a whole different level to everyone else in the band should explain what you’re dealing with so yeah it has been challenging at times.”

Meanwhile, U2 will release a remastered edition of ‘All That You Can’t Leave Behind’ to mark the seminal LP’s 20th anniversary.

The release is comprised of outtakes from the sessions for the album, 19 tracks penned on their ‘Elevation Tour’ and 11 remixes, as well as the new track, ‘The Ground Beneath Her Feet’.

In March, Bono released the song ‘Let Your Love Be Known’, which he wrote in just an hour to the people of Italy, the Irish and “anyone” in a “tight spot”, including health professionals “on the front line”, amid the global health crisis.

Cardi encouraged her fans to "enjoy your family & friends and the turkey legs" during the holiday, while Bieber summed up his Thanksgiving message...
Read more
- Advertisement -

Cardi encouraged her fans to "enjoy your family & friends and the turkey legs" during the holiday, while Bieber summed up his Thanksgiving message...
Read more

Lorde has urged world leaders to take action on climate change after witnessing the problem first-hand during a trip to Antarctica.The Royals singer, 24,...
Read more

You Me At Six have shared the video for the title track of their forthcoming album ‘SUCKAPUNCH’. The clip, which you can view below, sees...
Read more

The photograph was shot by Mert Alas and Marcus Piggott, who have also worked with Oprah Winfrey, Rihanna and Angelina Jolie.Lopez also invited her...
Read more
- Advertisement -