Huawei has already impressed with its GT series and its latest smartwatch, the Watch Fit, doesn’t disappoint either. It comes across as a versatile and reasonable option, particularly for entry-level fitness enthusiasts.

I typically hit the gym about 4-5 times a week and have found the Watch Fit to be an informative companion while performing all the functions I’d want from a smartwatch. 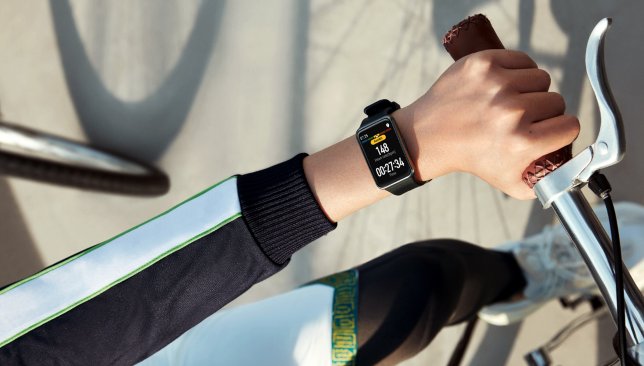 If the Watch Fit reminds you of the Apple Watch, you’re not alone. There certainly is a resemblance though Huawei’s latest product appears to be more compact. It comes in Cantaloupe Orange, Sakura Pink, Graphite Black, and Mint Green.

Like its predecessors, the Watch Fit is a stylish option. Its metallic body makes its overall appearance sleek and polished, catering to those who weren’t entirely enamoured by the more bulky round dials of the GT2 and GT2e.

At only 21g [34g with straps], the Watch Fit is significantly lighter as well. Its slender body can barely be felt on your wrist, making for an increasingly comfortable wear.

It features an AMOLED display that offers good visibility outdoors and a long single button on the right side. Its 1.64-inch OLED screen feels a little cramped but still displays all the necessary information and has a 456×280-pixel resolution.

The straps are quality and comfortable to wear but aren’t interchangeable, a feature that may have made it even more trendy.

Despite being a lightweight, the Watch Fit is still equipped with impressive hardware. It’s 5ATM water resistant, built for depths up to 50m. It also boasts an impressive battery life with a single charge lasting for 10 days.

I personally also prefer its charging device over that of the GT series. It’s magnetic pogo pin and USB cable is simplistic and easy to use.

Like the GT2 and GT2e, the Watch Fit’s fitness tracking is where it really comes to life. Most of the standard sensors are included. There’s onboard GPS but no altitude to track elevation. It does have heart rate sensors though.

It’s packed with 96 workout modes and monitors them well. There are 12 fitness courses with animations to help you through your workouts. They include stretches, quick fat-burning workouts, focused core exercises and more. The animations are provided for basic exercises but are helpful and it’s interesting to see if Huawei decides to build on this feature.

In terms of feedback, there’s enough for the casual fitness enthusiast to sink their teeth into with the analysis provided on the app. However, hardcore runners and more serious athletes are likely to be disappointed with the lack of detail. 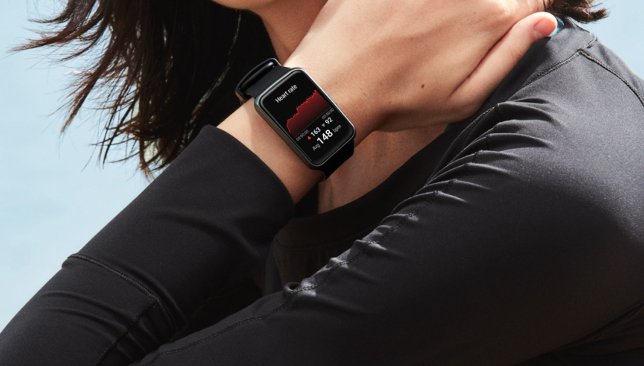 The simplicity of the interface is another plus point. A single button on the right side of the case brings up the lists of features which is then easily toggled through with responsive swipes and taps.

You have a variety of homescreens to choose from. Some are more stylish and flashy, others can be either simple and minimalistic or loaded with information.

There a re over 130 different watch face design options through Huawei’s Watch Face Store. Users can personalise their watch faces with their own photo albums synced directly from their smartphones, and they can choose which data is on display according to their own needs

Having a Huawei smartphone helps get the best out of the Watch Fit, allowing you to access the full range of features and data from the watch.

A non-Huawei phone can make the set up a little tricky but you do get used to it in a few days.

If you’re tech-oriented and looking for a smartwatch with cutting-edge features this is likely to leave you a little underwhelmed.

The range of features are pretty basic that includes the weather, timer and alarm apps. You can receive notifications but can’t act on them beyond reading and clearing. You can’t answer calls either or make contactless payments. However, it does have a remote camera shutter and music playback control.

The Watch Fit is a little limited when it comes to advanced features but it does retain the SpO2 feature that was introduced with the GT2e.

SpO2 is also known as oxygen saturation and the smartwatch measures the oxygen levels in a person’s bloodstream.

The normal level is between 90-100 and anyone falling below that is at risk of hypoxemia. It’s a great feature that helps users stay informed of their fitness levels, especially during activities like high-altitude hikes.

With Huawei TruSleep 2.0,the watch recognises when the user falls asleep and wakes up, using this data to present a comprehensive sleep analysis which shows the different stages. It can accurately identify six typical sleep problems including difficulty falling asleep, light sleeping, restlessness, early awakening, too many dreams, and an irregular work and rest schedule.

Despite resembling an Apple Watch, its lack of advanced features for iPhone users is ironically one of its chief drawbacks. However it’s biggest selling point is unsurprisingly its selling price. At just 399 AED, you definitely get your money’s worth given the range of features offered.

It’s also possibly the most sleek-looking and comfortable smartwatch on the market and the perfect companion for the average person looking to pursue a more active and healthy lifestyle.