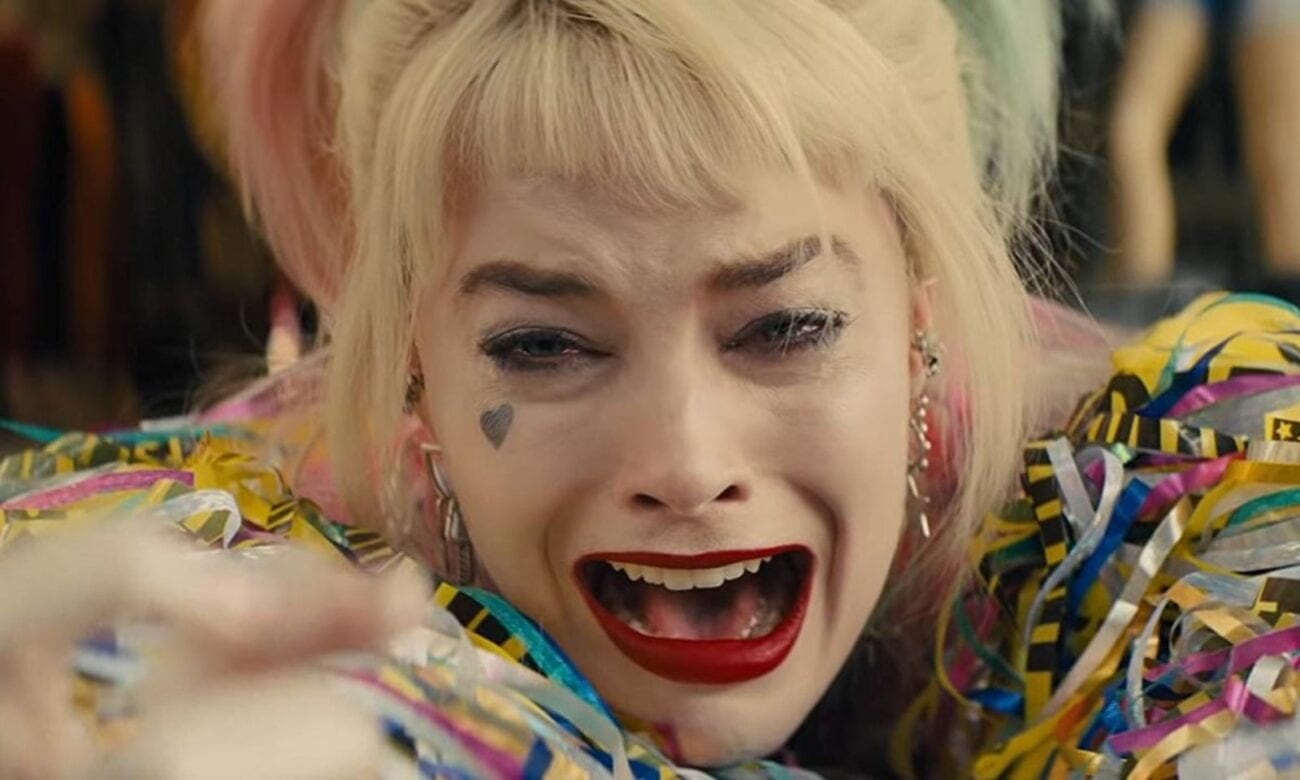 Florida Woman has been getting a bad rap. If we’re really honest we know crazy is everywhere though. Maybe the humidity and excessive amount of palm trees make Floridians more prone to losing their marbles, but there are definitely instances of crazy spread outside of the Sunshine State.

If you think only Floridians do things that are newsworthy, get ready to raise an eyebrow at these women. They’re kooky or angry or even both. It’s not just Florida Woman who’s eaten too much nutter butter.

Cats, grenades, and guns, oh my!

A woman with the surname of Chien arrived in a gym in Taiwan’s New Taipei City with her orange tabby cat in tow. Chien was not happy that workers were barring her entry because of the gym’s no pet policy. It’s strange enough to think that bringing your cat to the gym is appropriate, but that’s not even the crazy part.

Chien went on to argue with a personal trainer and yell, “I have a gun and a hand grenade. F**k you!” Chien then proceeded to strip naked and start using gym facilities. She handed a random staff member her cat, continued to threaten other staff, and started to use things like the battle rope equipment.

It took 30 minutes before police arrived and put a stop to her erratic behavior. We guess her thought process was, if you won’t let my pussy cat in, I’ll just have to show you mine. Needless to say, she lost her gym membership.

An infuriated local informed the Scotland Police that a woman was performing a sex act in the park while a man filmed it. The couple apparently got away before police could apprehend them. 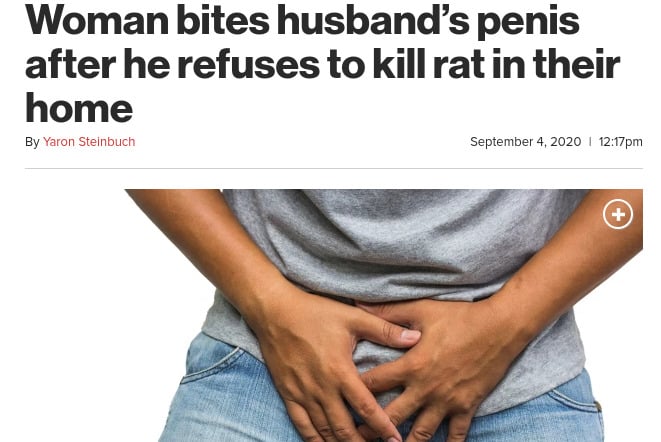 Look at the chompers on this crazy

In Kitwe, Zambia a husband named Abraham Musonda stumbled home after a night of drinking to his irritated wife Mukupa. Mukupa told him that there was a rat rustling around in the room and that she wanted him to get rid of it because she couldn’t sleep with the rodent in the room.

Apparently Abraham refused because Mukupa gave him a startlingly aggressive response to his laziness. She chomped right into his penis causing a major tear that he had to go to the hospital for. Let this be a lesson to the husbands out there if they value their junk; Listen to your wives. 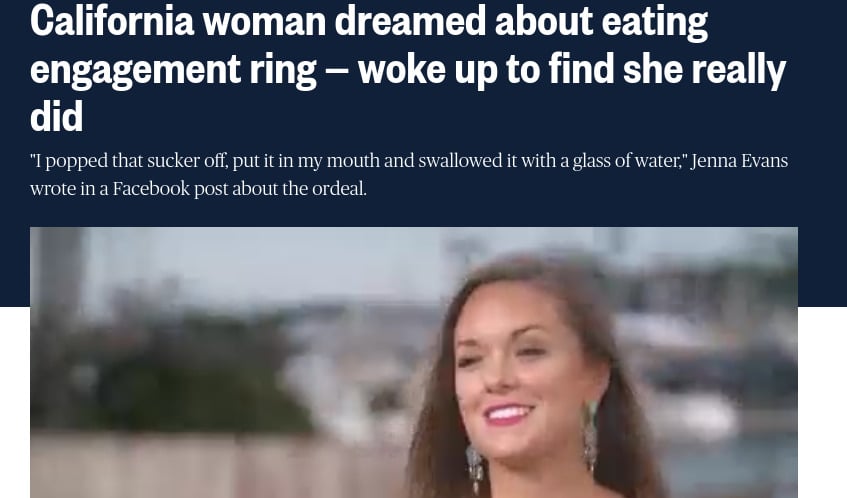 A devouring kind of love

This Californian woman had a dream that she had to swallow her engagement ring in order to protect it from robbers. When she awoke she was dismayed to find that although the villains accosting her never happened, her act of swallowing her engagement ring was.

She had to get an upper endoscopy in order to retrieve the ring. The couple still ended up getting married and the wife promised not to eat her engagement ring anymore. 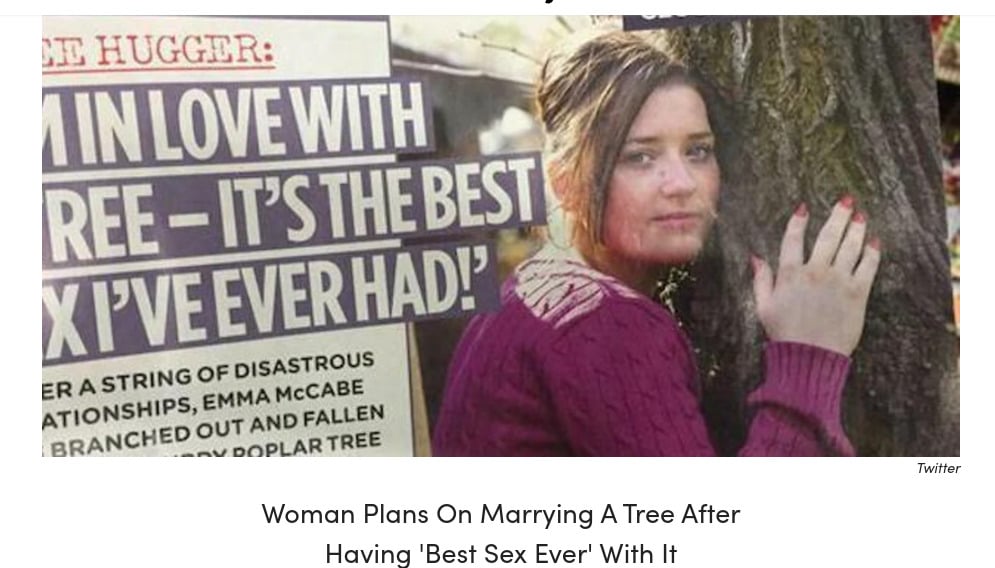 This takes tree-hugger to new levels

A woman named Emma McCabe allegedly told British Closer Magazine that she was fed up with human relationships and found solace in having a sexual relationship with a tree. McCabe named the poplar tree suitor Tim and held no details back on how it satisfied her sexual needs.

She is very careful about looking at other trees but not touching so as to not cheat on her tree boyfriend. McCabe says that Tim is great emotional support and that she plans on marrying it eventually. 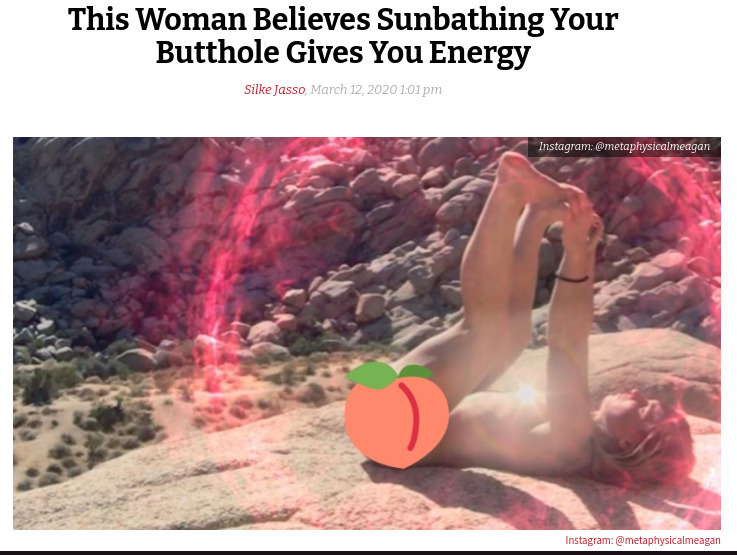 Butt-bathing is the new yoga

Instagram influencer Meagan came out to fans about an interesting new “bum-sunning” ritual she was taking part in. Meagan feels that the body parts usually left in shade by clothes deserve their time in the sun too. Meagan posted exposing pictures of herself taking part in the ritual. She laid flat on her back with her legs in the air completely naked.

Meagan asserts that 30 seconds exposing your butthole to the sun is “equivalent of a full day of sunlight with your clothes on.” Meagan herself usually exposes herself for about five minutes each day. She even goes as far as saying that this ritual gives her so much energy that she’s been able to ditch coffee. Be careful before attempting this yourself if your curiosity has been piqued. People have reported anus sunburn as being no fun.