The Philippines has recorded 3,372 new coronavirus cases and 79 more deaths.

In a bulletin, the Department of Health said the Southeast Asian country’s confirmed cases of infections had risen to 261,216, the highest in the region, while its death toll had climbed to 4,371.

The latest report brought the total number of infections to 218,382 and deaths to 8,723, the highest number of deaths in Southeast Asia.

The country’s capital Jakarta will reimpose stricter wide-scale restrictions starting on Monday to control spread of the virus in the mega city.

08:15 GMT – India interior minister back in hospital after recovering from COVID-19

India’s interior minister Amit Shah has been admitted to the hospital, nearly two weeks after he was treated for coronavirus.

Shah, a close aide of Prime Minister Narendra Modi and the virtual number-two in his cabinet, was admitted to the government-run All India Institute for Medical Sciences (AIIMS) in the capital New Delhi, the hospital said in a statement.

“Honourable Home Minister was discharged from AIIMS, New Delhi, after post Covid care on August 30,” the statement read. “As per advise given at discharge, he has now been admitted for complete medical checkup before parliament session for 1-2 days.”

Shah is the highest-profile Indian politician to have been infected with the coronavirus.

Austria is experiencing the start of a second wave of coronavirus infections, its chancellor has said, as cases spike upwards in line with other EU countries.

From Friday to Saturday, the Alpine nation of nearly nine million people reported 869 new cases – more than half of those in the capital Vienna.

“What we are experiencing is the beginning of the second wave,” Chancellor Sebastian Kurz said in a statement, appealing to the population to stick to anti-virus measures and reduce social contacts.

Russia has reported 5,449 new coronavirus cases , pushing its national tally to 1,062,811, the fourth largest in the world.

Authorities said 94 people had died in the last 24 hours, bringing the official death toll to 18,578.

The government lifted a ban on onsite dining after 9 pm though still requires restaurants and cafes to restrict seating and record patrons’ names and contact details.

While leisure facilities such as gyms and internet cafes are also allowed to reopen, under so-called phase two restrictions, indoor gatherings are limited to 50 people and outdoor gatherings to 100, while spectators are banned from sporting events.

The Czech Republic has reported its largest single-day increase in new coronavirus infections for a third straight day, recording 1,541 cases, according to Health Ministry data.

It was the fifth day in a row with new infections above 1,000 as the country of 10.7 million sees a surge in cases that is among the fastest in the European Union.

The government has tightened rules requiring face mask use but aims to avoid harsh lockdowns.

Even as infections are growing faster in India than anywhere else in the world, the number of people recovering from the virus has also risen sharply. The country’s recovery rate stands at 77.77 percent and nearly 70,000 recoveries have been reported every day in the month of September, according to the Health Ministry.

Hi, this is Elizabeth Melimopoulos in Doha taking over the live updates from my colleague Ted Regencia in Kuala Lumpur.

AstraZeneca has resumed British clinical trials of its COVID-19 vaccine, one of the most advanced in development, after getting the green light from safety watchdogs, the company said.

“On 6 September, the standard review process triggered a voluntary pause to vaccination across all global trials to allow review of safety data by independent committees, and international regulators,” AstraZeneca said in a statement.

Italy’s health ministry has reported 1,501 new coronavirus cases and six more deaths, bringing the total number of cases to more than 286,000 and at least 35,603 deaths.

According to the ministry data, infections have been steadily increasing for the past six weeks, mostly among Italians returning from vacation. The number of people in intensive care has also increased from 121 to 182.

Domestic air travel in Wuhan, the epicentre of the global coronavirus outbreak, has returned to pre-pandemic levels, authorities say on Sunday.

The virus was first detected in Wuhan late last year and the city underwent a draconian 76-day lockdown as its hospitals struggled to deal with a tidal wave of cases that required the rapid construction of field hospitals.

Since re-opening in early April, life has gradually returned to normal and numbers of domestic flights serving the city, as well as the number of passengers, had fully recovered, according to the operator of Wuhan Tianhe International airport. It said 64,700 passengers were transported on 500 domestic flights on Friday.

Lockdown restrictions in Australia’s state of Victoria will ease very slightly as of Monday, state officials said, as the number of new daily coronavirus cases continued to fall in the country’s hotspot, according to Reuters news agency.

Announcing a 3-billion Australian dollar ($2.2bn) package in financial aid to businesses in Victoria, home to a quarter of Australia’s population, officials also said there were 41 new coronavirus infections on Sunday and seven more deaths.

The numbers confirm a steady downward trend from a peak of more than 700 cases in a single day in early August. Victoria accounts for about 75 percent of Australia’s more than 26,600 COVID-19 cases and its capital, Melbourne, has been under strict lockdown for several weeks. 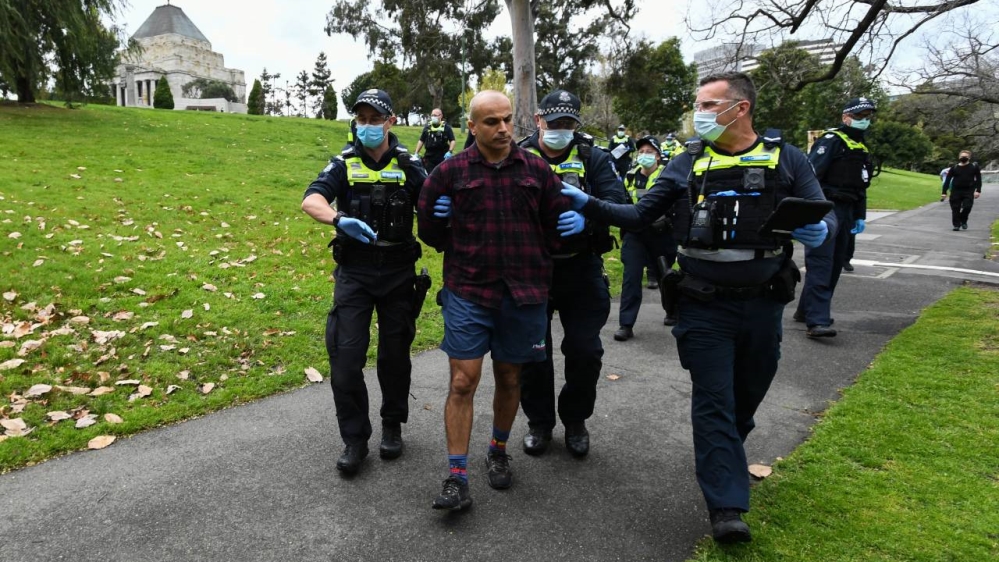 The Robert Koch Institute (RKI) also reported that as of Sunday, two more fatalities. Germany has more than 260,000 cases and about 9,352 deaths linked to COVID-19.

South Korea reported on Sunday at least 121 new coronavirus cases, bringing the total in the country to 22,176.

According to the Korea Disease Control and Prevention Agency, 99 of the new infections were from local sources. Three more deaths were also reported, raising the total to 358.

Later on Sunday, the country will decide whether to extend stricter antivirus curbs in the greater Seoul area by another week, according to Yonhap news agency.

Mexico’s health ministry has reported 5,674 new confirmed coronavirus cases, as well as 421 additional fatalities, bringing the total number of deaths to 70,604 and 663,973 infections.

The government says the real number of infected people is likely to be significantly higher than the confirmed cases.

The virus has ravaged an already slumping economy, which is now seen contracting by up to 13 percent this year, the deepest downturn since the 1930s-era Great Depression, according to Reuters news agency.

The UN refugee agency is stepping up efforts to combat COVID-19 among tens of thousands of Syrians in camps in Jordan after the first five cases were confirmed last week, the head of the agency in the country said.

The infections in Zaatari and Azraq camps, which house approximately 120,000 refugees, were the first since the pandemic was first reported in the kingdom last March.

“The developments this week have obviously been a worrying situation for all, but especially for refugees living in the camps. Crowded spaces and cramped living conditions make social distancing difficult,” said Dominik Bartsch, the UNHCR representative in Jordan.

For all the key developments from yesterday, September 12, go here.