The end of 2020 will feature a fight between YouTube star Jake Paul and former NBA star Nate Robinson....
Read more

The United Arab Emirates and Bahrain have signed agreements to normalise relations with Israel in a strategic realignment of Middle Eastern countries against Iran.

United States President Donald Trump on Tuesday hosted a White House ceremony capping a dramatic month when first the UAE and then Bahrain agreed to normalise ties without a resolution of Israel’s decades-old conflict with the Palestinians. The Palestinians have condemned the agreements.

The deals make them the third and fourth Arab states to take such steps to normalise ties since Israel signed peace treaties with Egypt in 1979 and Jordan in 1994.

The UAE’s minister of state for foreign affairs, Anwar Gargash, said his country’s decision to normalise relations with Israel had “broken the psychological barrier” and was “the way forward” for the region.

The back-to-back agreements mark an improbable diplomatic victory for Trump. He has spent his presidency forecasting deals on such intractable problems as North Korea’s nuclear programme only to find actual achievements elusive.

Bringing Israel, the UAE and Bahrain together may be their shared concern about Iran’s rising influence in the region and development of ballistic missiles. Iran has been critical of both deals. Fellow Gulf state Qatar has ruled out normalising ties with Israel until the Israeli-Palestinian conflict is resolved.

With Trump up for re-election on November 3, the accords could help shore up support among pro-Israel Christian evangelical voters in the US, an important part of his political base. 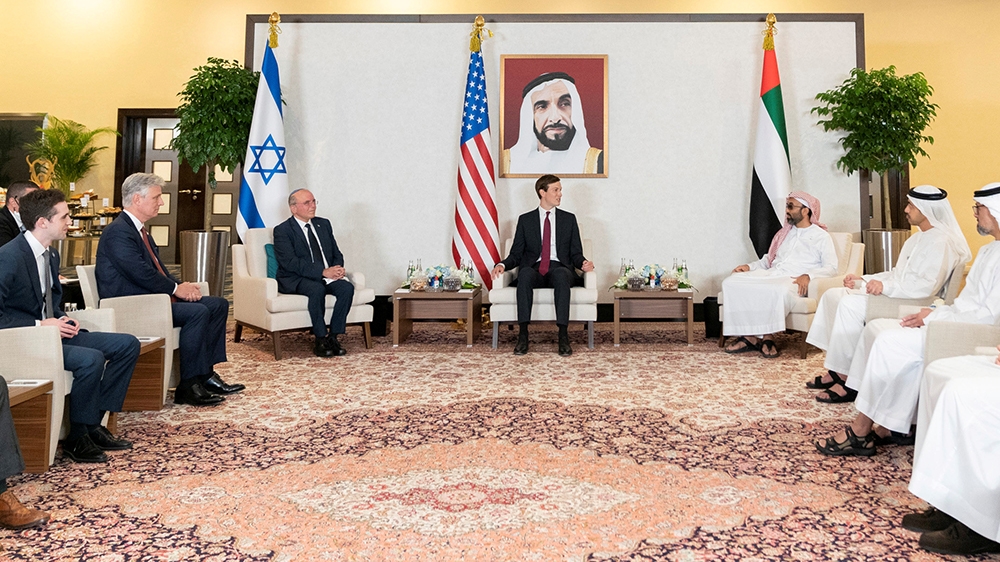 US President Donald Trump’s son-in-law and senior adviser Jared Kushner negotiated the agreements with UAE officials in a meeting in Abu Dhabi, United Arab Emirates on August 31, 2020 [Ministry of Presidential Affairs/Handout via Reuters]

Speaking to Fox News hours before the ceremony, Trump said he expected more Arab countries to normalise ties with Israel and predicted the Palestinians would eventually join as well or else be “left out in the cold”.

One target of White House appeals is Saudi Arabia, the biggest Gulf Arab power. So far, the Saudis, whose king is custodian of Islam’s holiest sites and rules the world’s largest oil exporter, have signalled they are not ready.

Another target is Oman, whose leader spoke with Trump last week. Qatar’s foreign ministry spokeswoman, Lolwah al-Khater, told Bloomberg on Monday that normalising relations with Isreal “can’t be the answer” to the Israeli-Palestinian conflict.

Although a diplomatic win for Netanyahu, the ceremony takes place while he faces criticism at home of his handling of the coronavirus pandemic and a corruption trial on charges of bribery, fraud and breach of trust that have led to frequent street protests.

Netanyahu denies any wrongdoing and describes his trial as a left-wing political witch-hunt aimed at unseating a popular right-wing leader. 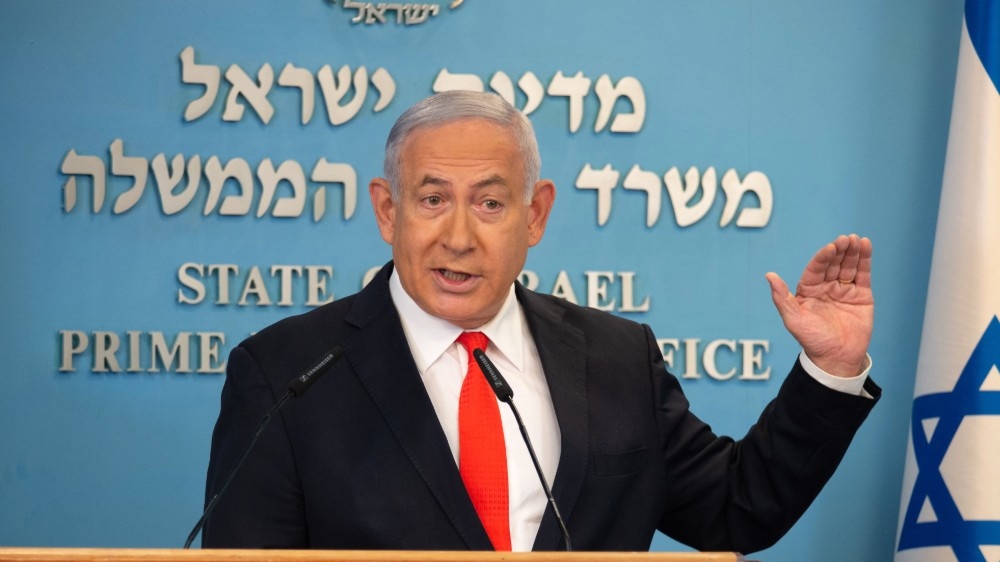 Some differences remain despite warming ties. Trump said on Tuesday he would have no problem selling advanced stealth F-35 fighter jets to the UAE, which has long sought to obtain them. But Israel, which has the F-35, has made clear it still objects to such a sale.

Frustrated by the Palestinians’ refusal to take part in Trump’s Middle East peace initiative, the White House has sought to bypass them in hopes they will see the deals with the UAE and Bahrain as incentives, even leverage, for peace talks.

Prompted by the “normalisation” of ties between Arab states and Israel, fractured Palestinian political factions are working diligently in multilateral talks to restore unity and mend the division between the Gaza Strip and the West Bank in negotiations far more promising than previous efforts.

The Palestinian leadership, which has long accused Trump of pro-Israel bias, has denounced the Arab rapprochement with Israel as a betrayal of their cause.

In return for normalisation with the UAE, Netanyahu agreed to suspend a plan to annex parts of the occupied West Bank. 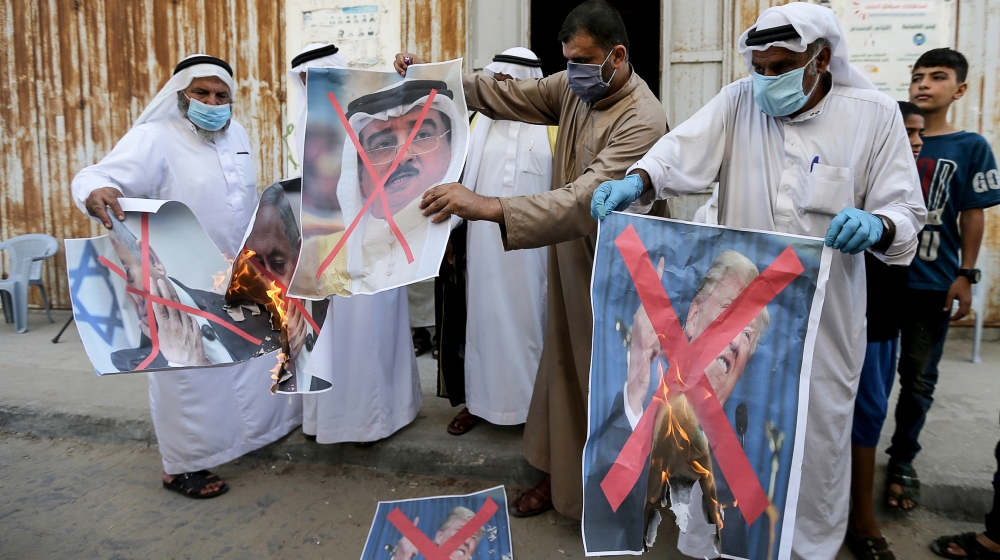 Palestinians view the new agreements as weakening a long-standing pan-Arab position that calls for Israeli withdrawal from occupied territories and acceptance of Palestinian statehood in return for normal relations with Arab countries.

Though negotiations between Israel and the Palestinians last broke down in 2014, some Gulf Arab states and several other Arab countries have long had quiet, informal contacts with Israel.

The end of 2020 will feature a fight between YouTube star Jake Paul and former NBA star Nate Robinson. The first question you might...
Read more
Music

Guatemala City, Guatemala – Guatemalans have returned to protest across the country for the second Saturday in a row, as discontent with President Alejandro...
Read more
- Advertisement -

Guatemala City, Guatemala – Guatemalans have returned to protest across the country for the second Saturday in a row, as discontent with President Alejandro...
Read more

The Academy Award-winning actor Jon Voight has defied the liberal world of Hollywood once again this week by posting a video warning of what...
Read more

After the killing of General Suleimani, there was a brief missile attack on an American facility that miraculously killed no American troops (though there...
Read more
- Advertisement -

Why are Jake Paul and Nate Robinson fighting? A random interview...