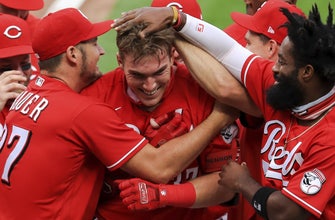 CINCINNATI (AP) — Mike Moustakas hit a big three-run homer in the fifth inning, and the Cincinnati Reds beat the Pittsburgh Pirates 9-4 on Monday night for a doubleheader sweep.

Moustakas drove in Shogo Akiyama and Eugenio Suárez with a two-out shot to center off Nik Turley (0-2). Pittsburgh had just taken a 4-3 lead on rookie Ke’Bryan Hayes’ two-run shot with two out in the top half of the inning.

“I’ve hit quite a few big home runs in my career, for sure,” Moustakas said. “It was two huge wins for us today to get momentum going into this last little stretch.”

Brian Goodwin and Joey Votto also connected for Cincinnati, which won a third straight game for the first time since Aug. 28. Sal Romano (1-0) got the victory, retiring Gregory Polanco with the bases loaded for the final out of the fifth.

Romano was promoted on Sunday from the taxi squad.

“It was a good feeling for sure to contribute to the team,” Romano said. “I knew in my heart I could get back here. I know I can pitch here. I had to grind it out and it paid off today,”

It’s been a long road back for the man who got the @Reds out of a bases-loaded jam in the 5th inning tonight. He’s grateful to be here and ready to help for the playoff push.#TakeTheCentral pic.twitter.com/6vGGiMswCV

In the opener, rookie Tyler Stephenson hit a tiebreaking two-run homer in the seventh inning, lifting the Reds to a 3-1 win.

With two out and the bases empty, rookie Jose Garcia singled to left against Sam Howard (2-2). Manager David Bell then sent Stephenson up to hit for Shogo Akiyama, and the catcher hit a drive to left for his second homer.

The 24-year-old Stephenson lifted his batting helmet off his head with his left hand and pumped both arms in the air before being swarmed by teammates at the plate.

“I had one of these at High A, but this was so much more exciting,” Stephenson said. ”(Coach) Freddie (Benavides) told me right before that, if Jose gets on, I’m going to pinch-hit. I had been hitting in the cage all game, but that time I didn’t get a chance to put my gloves on because it was the next pitch he got a hit.”

Votto also homered in the first game, and Raisel Iglesias (3-3) got two outs for the win.

“It was two great team wins,” said Reds manager David Bell, celebrating his 48th birthday. “When Moustakas hit his home run it was as excited as I’ve seen our team. Against a tough left-handed pitcher, he just hung in there.”

“The momentum is real.”

Four @Reds wins in five games and a doubleheader sweep make for a happy birthday for David Bell.#TakeTheCentral pic.twitter.com/JsTGIsaHmb

Colin Moran connected for Pittsburgh in the opener, and Josh Bell went deep in the second game.

The Pirates struck out a combined 25 times in the two games, and their pitchers issued nine walks in the nightcap. The Pirates were swept in a doubleheader for the first time since May 1, 2014, at Baltimore.

“Those are the things that bother me the most,” Pittsburgh manager Derek Shelton said. “You can’t strike out 25 times in 14 innings and walk nine guys in a seven-inning game.”

The Reds broke open the second game by scoring three runs in the sixth without getting a hit. Akiyama walked with the bases loaded. Shortstop Erik Gonzalez had a costly error, and Curt Casali scored on a wild pitch by Geoff Hartlieb.

Anthony DeSclafani struck out seven in 4 2/3 innings for Cincinnati in his first start since Sept. 5. He was charged with four runs and seven hits.

Pittsburgh right-hander Mitch Keller permitted three runs in three innings. He was activated off the injured list after being sidelined by a left oblique injury.

Keller walked Suárez leading off the second. Moustakas flied out before Goodwin lofted an opposite-field drive into the left-field seats.

Goodwin’s homer was his second in two days and sixth of the season.

Votto led off the third with a booming shot to deep right-center for his ninth homer.

The Pirates lost a second run in the first inning of the nightcap when Moran failed to score from second as Josh Bell was thrown out trying to stretch a single into a double with two outs. Moran slowed down while approaching the plate and didn’t touch it before Bell was thrown out. A video review confirmed the call.

Moran’s tying drive in the opener was the first homer by a current Pirate off Reds right-hander Trevor Bauer.

Cincinnati’s Nick Senzel started in center in the opener and went 0 for 3 in his first game in exactly one month. The second-overall selection in the 2016 draft was placed on the 10-day injured list on Aug. 14 with an undisclosed issue.

Pirates: Between games, RHP Kyle Crick was placed on the 10-day injured list with a strained lat.

Reds: RHP José De León left after walking the only two batters he faced in the fifth inning. He was visited by a trainer.

Pirates: RHP Joe Musgrove (0-4) was slated to start Tuesday. He threw four scoreless innings against the White Sox last Tuesday in his second start since coming off the injured list. He had been sidelined by right triceps inflammation.