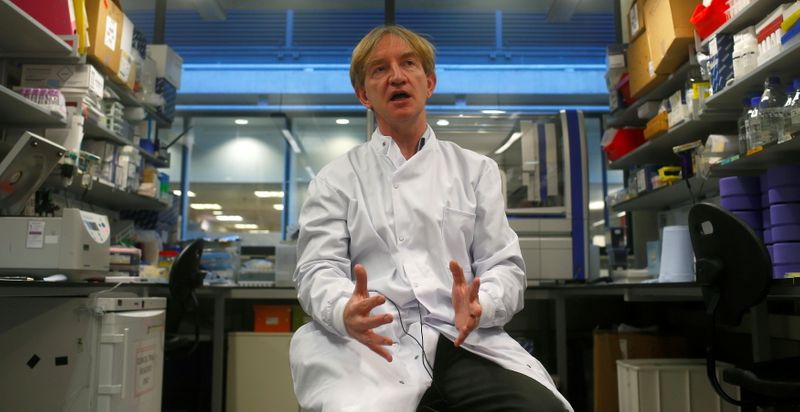 © Reuters. FILE PHOTO: Professor Adrian Hill speaks to members of the media at The Jenner Institute in Oxford

LONDON (Reuters) – One of the Oxford scientists who co-developed AstraZeneca (NASDAQ:)’s COVID-19 vaccine defended its safety on Friday and said he was not worried that some countries had opted to restrict its use amid concerns about a possible link to very rare side effects.

Adrian Hill, director of the Oxford University’s Jenner Institute, said teams around the world were working to pin down any potential mechanism for what might be causing the blood clots, using real world data now that so many shots have been administered.

He agreed with medicines regulators in Britain, and Europe, and with World Health Organization experts, that the risk-benefit balance for the coronavirus shot favoured its use.

“If some countries choose to use one (COVID) vaccine, there will be more of the other vaccines for other countries,” Hill told Reuters. “We don’t see this as a huge issue.”

More than a dozen European countries had suspended use of AstraZeneca’s COVID-19 vaccine, called Vaxzevria, amid reports of cases of the clots combined with low platelets in a very small number of people who had received it. Many countries have resumed using the shot, but with some restrictions.

After reviewing the safety reports, the European Medicines Agency (EMA) regulator said that while there was a possible link, a direct causal link had not been established and the vaccine’s benefits in preventing severe COVID-19 disease were substantial.

Asked whether he was surprised by the reports of blood clot cases occurring in Britain, Norway, Germany and other countries that have been rolling out Vaxzevria, Hill said such extremely rare side effects would not have emerged even in large-scale trials involving tens of thousands of participants.

“These very, very rare side effects are very hard to pick up with any vaccine. What’s good is that we can now pick these up – because the data linkage infrastructure in the UK and many other countries is able to do this remarkably quickly.”

Hill said the potential mechanism behind any possible link between the vaccine and the rare blood clot cases was “a matter of intense research by many groups around the world”, including teams at the Jenner Institute and at AstraZeneca.

“It may or may not take a long time to figure out,” he said. “I think we’ll be able to do it reasonably quickly and hopefully come up with an immunisation regimen or approach that effectively completely avoids this issue. But we need to … learn more before that.”

Disclaimer: Fusion Media would like to remind you that the data contained in this website is not necessarily real-time nor accurate. All CFDs (stocks, indexes, futures) and Forex prices are not provided by exchanges but rather by market makers, and so prices may not be accurate and may differ from the actual market price, meaning prices are indicative and not appropriate for trading purposes. Therefore Fusion Media doesn`t bear any responsibility for any trading losses you might incur as a result of using this data.

Fusion Media or anyone involved with Fusion Media will not accept any liability for loss or damage as a result of reliance on the information including data, quotes, charts and buy/sell signals contained within this website. Please be fully informed regarding the risks and costs associated with trading the financial markets, it is one of the riskiest investment forms possible.