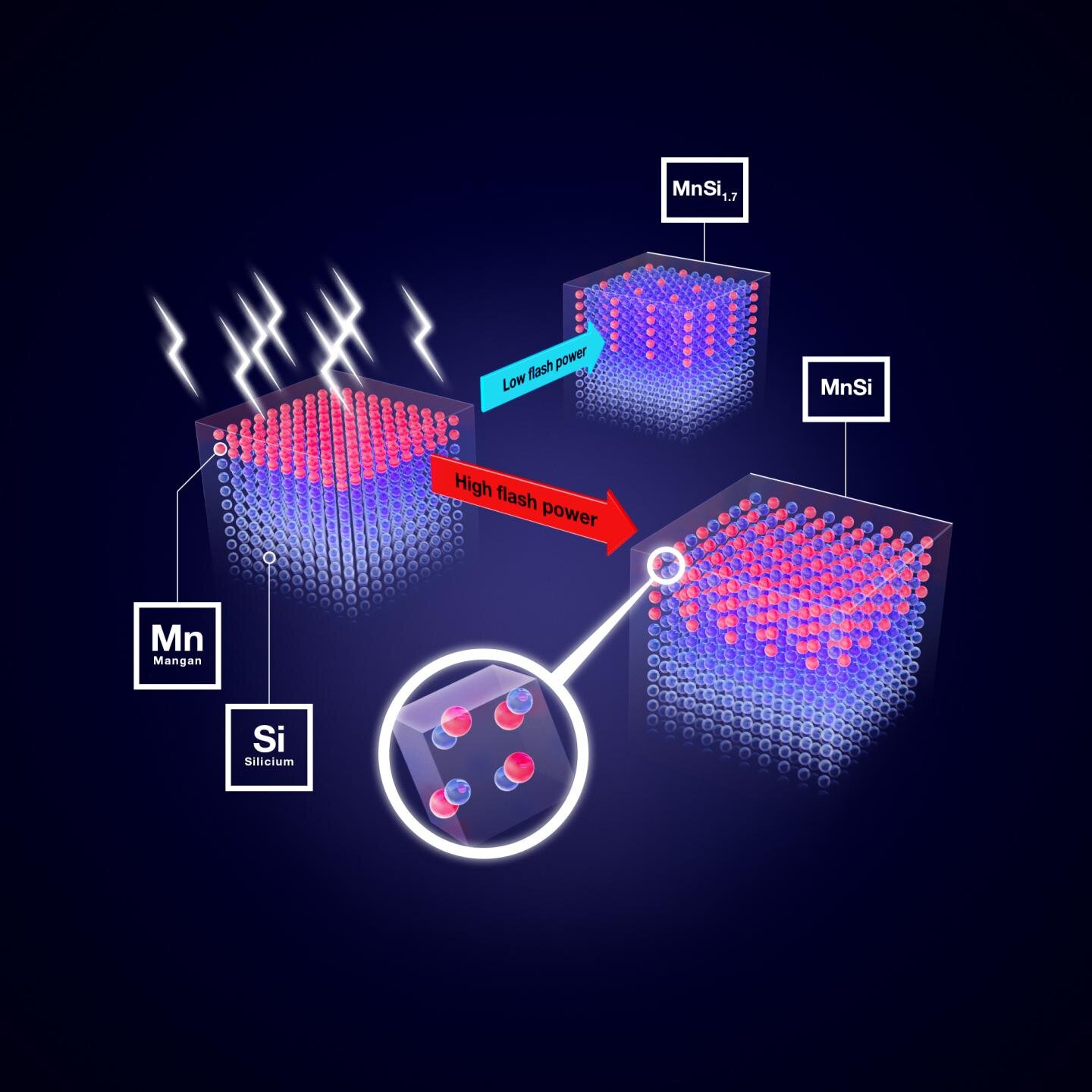 Skyrmions—tiny magnetic vortices—are considered promising candidates for tomorrow’s information memory devices which may be able to achieve enormous data storage and processing capacities. A research team led by the Helmholtz-Zentrum Dresden-Rossendorf (HZDR) has developed a method to grow a particular magnetic thin-film material that hosts these magnetic vortices. A central aspect of this new method is the abrupt heating of the material with short, very bright flashes of light, as the international team, consisting of scientists from HZDR, the Leibniz Institute for Solid State and Materials Research Dresden, TU Dresden (TUD), and Chinese partners, describes in the journal Advanced Functional Materials.

In 2009, a research team had made a remarkable discovery: They found that tiny magnetic vortices can form in a material called manganese silicide—an alloy of manganese and silicon. Since then, these skyrmions, named after British physicist Tony Skyrme, have been considered promising candidates for future magnetic storage devices. They can be easily formed on and erased from surfaces and are no larger than a few nanometers (billionths of a meter), which makes them much smaller than the magnetic bits on today’s hard drives that measure about 50 nanometers.

“In addition, skyrmions can be better targeted with electricity than with magnetic fields, as is done with current hard drives,” explains Dr. Shengqiang Zhou, a physicist at HZDR’s Institute of Ion Beam Physics and Materials Research. “Targeting with an electric current allows us to achieve better scalability, which might enable us to build much denser and faster storage devices in the future.” But there are still some obstacles to overcome along the way. Among other things, silicon and manganese present an unfavorable property when they form crystals of manganese silicide: Instead of consistently producing one specific, well-defined phase, the two elements can form many different crystal phases. Thin films of an Mn-Si alloy, known as the B20 phase, are particularly suitable for the formation of skyrmions.

Producing this alloy is anything but easy, though, because another undesirable crystal phase, called MnSi1.7, inevitably forms during the production process, impeding or preventing the formation of skyrmions. Specifically, lower temperatures and slower cooling of the material favors MnSi1.7. Shengqiang Zhou’s team has now developed a method that prevents its formation, leaving only thin layers of flawless B20-MnSi.

The core element of the new process is a special heat treatment. “It’s a bit like making a pancake,” Zhou explains. “It tastes best when it is crispy on the outside and as soft as possible on the inside.” When you pour the batter into a hot pan, it bakes so fast that the inside stays nice and soft. When you bake the batter in the oven, however, it heats up much more evenly and hardens all over—and you get a rather mediocre pancake.

So the experts used this pancake strategy of rapid, intense heating as their model. “When we heat a thin manganese film placed on top of a silicon wafer very briefly, we introduce very little energy into the material,” Zhou explains their rationale. “This means it will cool down fast—so fast, in fact, that the unwanted MnSi1.7 won’t have time to form.” The challenge is how to heat something rapidly and vigorously at the same time. The research group found the solution in bright, intense flashes of white light.

Such flashes can be generated at the “BlitzLab,” a Helmholtz Innovation Lab located on the Rossendorf campus. Various series of measurements confirmed the assumption: “By varying the power of the flashes, we were able to adjust the ratio of the different crystal phases with great precision,” reports Shengqiang Zhou. “When we applied relatively strong powers, thin films of pure B20-MnSi formed as we had hoped.”

As a result, the skyrmions that can be generated in these layers are now stable over a much wider temperature and magnetic field range than previously observed in this material. Manganese silicide itself is unlikely to be suitable for practical use since it only works at very low temperatures. But it could serve as an important model for other, more practicable materials. “Many alloys pose the problem that they have different phases,” Zhou explains. “And our approach could help separate these phases in the future.”

The place Do Galaxies Come From?

When, The place And Why You Want To Be Half Of This Weekend’s Digital Occasion As On-line Astronomy Booms