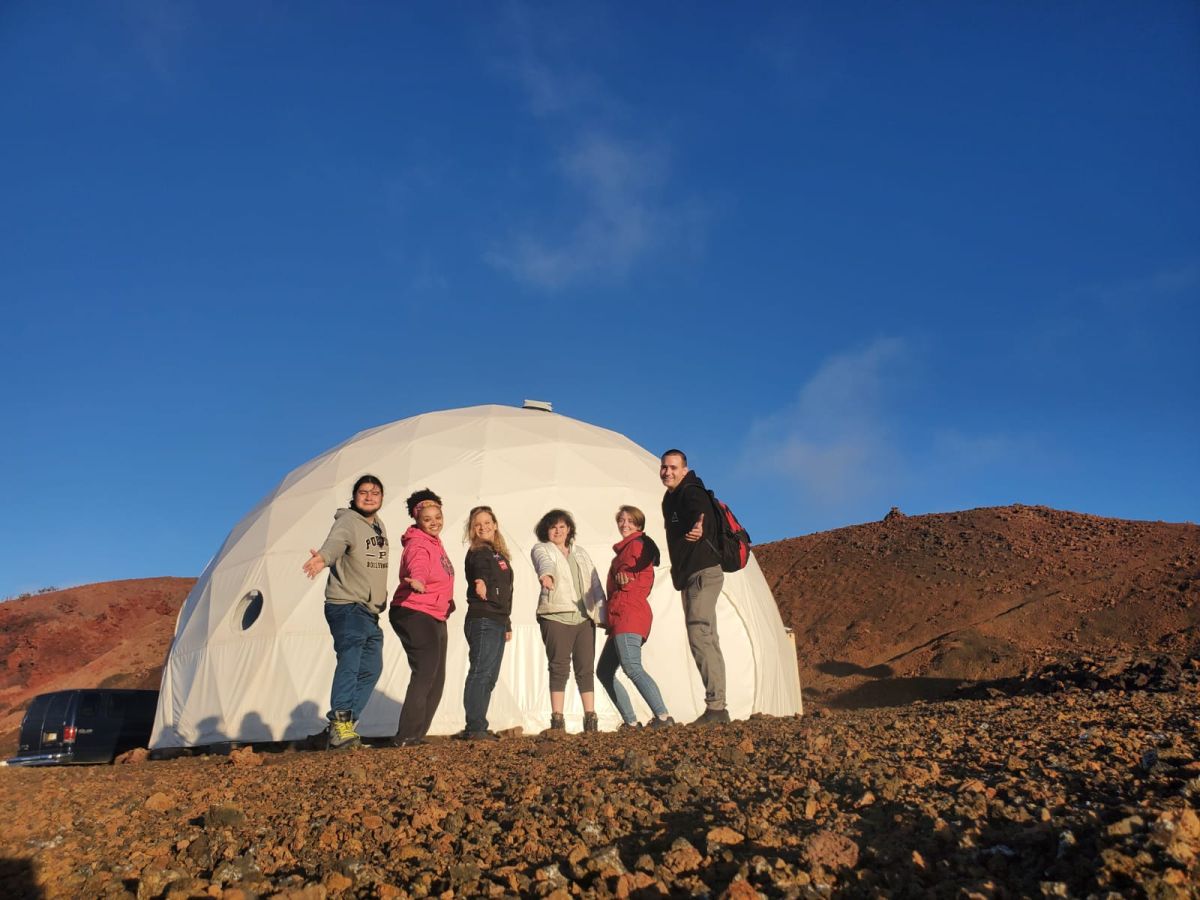 Dr. Michaela Musilova is the director of Hawaii Space Exploration Analog and Simulation (HI-SEAS) program, which conducts analog missions to the moon and Mars for scientific research at a habitat on the volcano Mauna Loa. Currently, she is in command of the two-week Selene III lunar mission and contributed this report to Space.com’s Expert Voices: Op-Ed & Insights.

“We won’t let you die!” the crew said to me. Skeptical and amused, I responded: “I’ve heard that before.” Fortunately, we were only talking about a simulated death scenario. More precisely, we were playing a game of “Keep Talking and Nobody Explodes,” which is a computer game in which a team has to work together to disarm a bomb. The Selene III crew decided to take on this game as part of our first analog lunar mission bonding activities in the HI-SEAS habitat.

During the game, one team member has to perform a number of tasks to disarm a virtual bomb on their computer. Other players have access to a manual that contains instructions on how to disarm the bomb, but they can’t see the bomb itself. In this way, the game is very much about good communication skills and staying calm under stress. If you make any mistakes, the timer to set off the bomb will speed up. You can only make two mistakes before the bomb will explode. It will also explode if you don’t disarm it before the timer goes off. The whole game is accompanied by very stressful music that is meant to make you more anxious as you get closer to the bomb exploding.

It’s definitely not a stress-free activity that I recommend anyone dives into, especially late at night. The Selene III crew didn’t seem to be too concerned about that tonight. We were all bundled up in blankets and warm clothes before Crew Engineer Oscar Ojeda suggested we play this game. Every crewmember took turns sitting in the “hot seat” behind the computer with the bomb, while the rest of the crew sat opposite them with the bomb instruction manual. Everyone that left the hot seat instantly exclaimed that it literally became a hot seat. They were no longer cold, despite the temperatures being around 61 degrees Fahrenheit (16 degrees Celsius) in the habitat, due to all of the stress of playing the game.

Related: What makes a great crew on the moon

I admit that I was very entertained when I watched the crew attempt to disarm more and more complex bombs, despite “killing each other” time and time again. As the crew’s commander, I decided to join in the fun and I also braved the hot seat. Sadly, the crew accidentally (maybe on purpose?) blew me up during the first round. That’s why I was not very convinced when they tried to reassure me that they wouldn’t let me die during the second try. Alas, their efforts were in vain, as we ran out of time disarming the bomb and it exploded yet again.

With a smile on my face, I resumed my spectator’s chair and pondered what made this game so addicting. I personally don’t need more stress in my life when leading simulated space missions, but the crew seemed to be thriving on it. I watched as they struggled to keep each other alive each time, but they kept going and trying endlessly until they achieved a more positive outcome. It only took another half-hour and their communication changed. They became more efficient at explaining things and getting certain tasks done quickly. Their transformation was almost tangible and I felt very proud of their quick progress.

I guess I can add this game to a list of successful bonding activities at HI-SEAS. They have ranged from “fiber pong” (a version of beer pong using fiber dietary supplements) to within-crew competitions and making horror movies. Every crew is different, so I have to adapt what we do as a team based on the crew composition and everyone’s personalities. Most of the time I let them decide as a crew what they want to do during our free time, though sometimes they need me to nudge them a bit to get the ball rolling. Once it starts metaphorically rolling though, the bonding activities continue until we part ways back on “Earth.”

The Selene III crew is made up of crewmembers that are happy to take the initiative and take on new tasks during the mission. These tasks don’t just relate to crew bonding, but also to cooking, baking, cleaning, starting new research projects and perfecting the habitat’s existing systems. All crewmembers keep themselves busy at all times with useful and helpful activities, which make me so grateful to have them on mission with me. At this rate, I have a feeling that we’ll complete a number of great projects by the end of the mission.

Our crew operations officer is Eboni Brown, who on Earth is a project and quality assurance manager at Echo & Co, a digital design company based in Massachusetts, while pursuing her master’s degree in mechanical and aerospace Engineering at the University of Virginia. During her time at HI-SEAS, Eboni will focus on chronic stress, particularly how it relates to human connectivity and emotional responses.

All of our crewmembers are multitaskers, for instance Crew Engineer Oscar I. Ojeda from Bogotá, Colombia, is finishing his master’s in the Purdue School of Aeronautics and Astronautics in West Lafayette, Indiana, and his private pilot’s license. He is passionate about human spaceflight and his research is focused on the importance of analog space missions for advancing the future human exploration beyond Earth.

Zoe Maxwell is the crew’s bioengineer and she’s an active duty airman at the Luke Air Force Base in Arizona, with aspirations to become an astronaut. During the mission, she’ll be working on testing the growth of perchlorate-eating bacteria in an aquaponic system with fish, under unstable conditions, to see if it’s viable for the sustainable filtration of perchlorate present on Mars. Perchlorates are reactive compounds in the Red Planet’s soil (and also found on Earth) that are toxic to humans. Radiation from the sun can trigger a chemical reaction in perchlorates that causes organic molecules to combust, making them toxic to some microbes, but perchlorates can provide an energy source for microbes as well.

We have another bioscience officer on the crew, Jason Fischer, who is a micro and molecular biologist working at NASA’s Kennedy Space Center in Cape Canaveral, Florida. He supports a wide variety of projects ranging from space crop production to the effects of simulated microgravity and space radiation on plant seeds. At HI-SEAS, he will be investigating bio-regenerative life support systems for growing microgreens on the moon or Mars.

The Selene III mission’s Science Communication Officer Brooke Edwards is a Solar System Ambassador for NASA’s Jet Propulsion Laboratory in Pasadena, California and a space columnist for Freshwater Reporter. Throughout the Selene III mission, she will be recording her experience as an analog astronaut to create further content for outreach activities.

As for me, my name is Dr. Michaela Musilova and I am yet again the commander of an analog space mission at HI-SEAS. My seemingly endless sequence of analog missions is the result of the HI-SEAS research facility not being able to proceed with normal pre-mission training during the pandemic. Instead, as the Director of HI-SEAS, I train the crew while on mission. When I’m not running mission operations, I perform research projects in astrobiology, in collaboration with NASA’s Goddard Space Flight Center in Greenbelt, Maryland and Honeybee Robotics in New York City.

Commander Musilova signing off to test whether the crew can keep me alive during the bomb exploding game. The result of this bonding activity may well affect how our crew relationships will evolve during this mission.

The place Do Galaxies Come From?

When, The place And Why You Want To Be Half Of This Weekend’s Digital Occasion As On-line Astronomy Booms