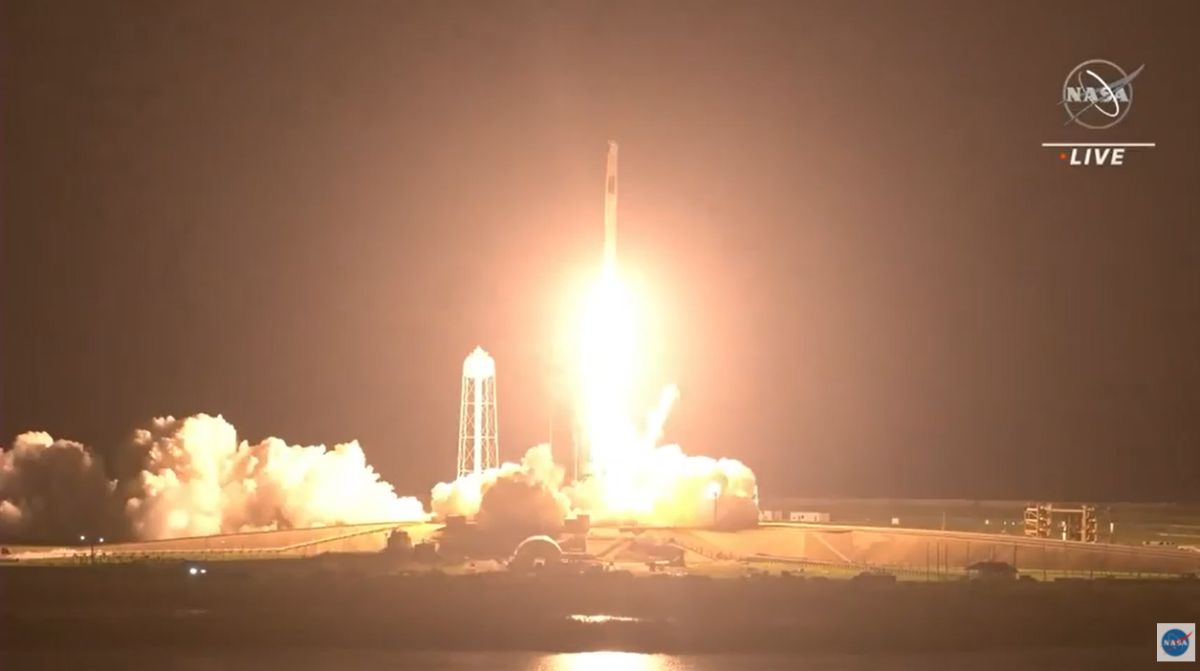 A slightly sooty Falcon 9 rocket topped with a Crew Dragon capsule took to the skies above NASA’s Kennedy Space Center here at 5:49 a.m. EDT (0949 GMT) today (April 23), lighting up the predawn sky as it lifted off from the historic Pad 39A.

The launch countdown proceeded smoothly, with the closeout crews completing leak and communications checks ahead of schedule. The crew was relaxed and even enjoyed a quick game that resembled rock, paper, scissors (but was actually a game Thomas played as a kid and shared with his crewmates) while waiting for the leak checks to be completed.

“Our crew is flying astronauts from NASA, ESA and JAXA, which hasn’t happened in over 20 years,” Kimbrough told SpaceX flight controllers just before launch as he thanked the NASA and SpaceX teams. “Off the Earth, for the Earth, Endeavour is ready to go.”

Crew-2’s launch was one for the history books. It marked several firsts, including the first time that people have flown on a used Crew Dragon and with a used Falcon 9 first stage, and the first time that two different international astronauts have ridden in the capsule.

The Crew Dragon vehicle that launched this morning, known as Endeavour, also lifted off in May of 2020, carrying NASA astronauts Bob Behnken and Doug Hurley to the ISS on the Demo-2 test flight, SpaceX’s first-ever crewed mission. In a nice bit of additional symmetry, Behnken is McArthur’s husband.

“Glad to be back in space for all of us,” Kimbrough radioed SpaceX flight controllers after reaching orbit.

The success of Demo-2 helped usher in a new era in spaceflight — one led by commercial companies.

The rise of private astronaut taxis

In July 2011, the space shuttle Atlantis touched down for the final time, ending the storied career of NASA’s fleet of space shuttles. The winged orbiters were NASA’s human spaceflight workhorses for 30 years and helped build the ISS, which celebrated its 20th anniversary of continuous human occupation last year.

But the shuttle’s days were limited. Just before its retirement, NASA decided that it wanted to hand over the reigns of low Earth orbit to private industry and entrusted two companies to ferry agency astronauts to and from space.

Since the shuttle’s retirement, every astronaut bound for the ISS had hitched a ride on a Russian Soyuz spacecraft — until Demo-2 brought private vehicles into the mix. Following that successful two-month test mission, NASA certified Crew Dragon to carry astronauts to and from the space station on a regular basis. The first operational Crew Dragon mission, Crew-1, ferried four astronauts to the ISS this past November.

In photos: SpaceX’s Crew-1 mission to the International Space Station

NASA’s first human spaceflight program, Mercury, launched a total of six people into space in the early years of the space age. With today’s liftoff, SpaceX has now put 10 people into orbit in less than 12 months.

“Flying on reused vehicles, on flight-proven vehicles, is key towards greater flight reliability and lowering the cost of access to space, which is what ultimately helps us make life multiplanetary,” SpaceX senior director Benji Reed said during a press briefing earlier this week.

SpaceX recovered its first Falcon 9 booster in December 2015. That first stage delivered a communications satellite into space for OrbComm before returning to Earth and touching down on terra firma at SpaceX’s landing pad here in Florida.

A few months later, the company recovered its first booster on a floating platform at sea, known as a drone ship. Currently, SpaceX has two drone ships in its fleet, named “Of Course I Still Love You” (OCISLY) and “Just Read the Instructions” (JRTI). (Landing on a drone ship at sea is less convenient than a terra firma touchdown but requires significantly less fuel.)

Having two drone ships at its disposal has helped SpaceX with its reusability efforts. In 2020, the company launched a record 26 missions, and only five of those were on brand-new rockets. The rest were on previously flown Falcon 9 rockets, and most of those recoveries came on the deck of a drone ship.

OCISLY was stationed out in the Atlantic Ocean prior to today’s liftoff, waiting patiently for the booster to touch down on its deck. Approximately nine minutes after launch, the booster landed on the ship’s massive deck, marking the 80th Falcon 9 touchdown to date.

That booster, dubbed B1061, damaged one of its landing legs when it touched down after the Crew-1 launch and had a noticeable lean as it sailed back into port.

As NASA’s Deputy certification manager for SpaceX, Carla Koch helps to lead a team that’s tasked with making sure that SpaceX has met the requirements set by NASA to ensure the Crew Dragon and Falcon 9 are safe to fly astronauts.

Koch said that there was some work that had to be done to B1061, including replacing the damaged landing leg, before today’s flight to ensure the launcher was ready to fly another crew.

Her team worked closely with SpaceX to qualify both Falcon 9 and Crew Dragon to fly multiple times. When NASA and SpaceX first partnered to launch astronauts, the agency required that SpaceX use a brand new Falcon and Dragon each launch. (NASA has since given SpaceX the go ahead to reuse both vehicles on crew launches.)

“At the original certification review, after the Demo-2 mission, NASA certified both Falcon and Dragon for one flight,” she told Space.com. “Engineers went back and reviewed both vehicles as well as documentation from SpaceX and subsequently certified the vehicles for two flights.”

“Anything beyond that and SpaceX will need another certification,” she added.

Kock also said that the team is working with SpaceX to eventually certify the Dragon for more flights, since the spacecraft can fly as many as five times before being retired.

SpaceX plans to reuse B1061 on its next crewed flight, which is scheduled to launch this September. That mission will be a little bit different, as it will carry four private citizens into space, as opposed to professional NASA astronauts.

The upcoming mission, known as Inspiration4, will see four citizen astronauts climb aboard a different Dragon crew capsule and spend three days orbiting Earth. The flight will be commanded by Jared Isaacman and is spearheaded as part of an effort to raise money for St. Jude Children’s Research Hospital. Isaacman will be joined on the flight by Haley Arceneaux, Sian Proctor and Chris Sembroski.

Going into today’s launch, the only concern was the weather. Unfavorable weather, including high winds along the flight path, prevented Crew-2 from getting off the ground on its original launch date of Thursday (April 22). Teams decided to forgo an Earth Day launch and delay the flight 24 hours in hopes that the weather would improve (which, of course, it did).

The four Crew-2 astronauts traveled to the pad approximately three hours before launch this morning, riding in white Tesla Model Xs adorned with the old NASA “worm” logo. Upon arrival, they took an elevator to the crew access arm, which stands approximately 265 feet (81 meters) above the launch pad, and then climbed into the capsule.

After a series of system checkouts, they then armed the Crew Dragon’s abort system, a crucial component in keeping them safe in the event of a launch emergency. SpaceX then began fueling the rocket with supercooled liquid oxygen and kerosene 45 minutes before liftoff.

Endeavour is expected to dock with the space station on Saturday (April 24) at 5:11 a.m. EDT (0911 GMT). The capsule and its four crewmembers will remain at the orbital outpost for six months.

Mercury Is Rising. Might 2021 Sees Our Smallest, Hottest And Quickest Neighbor Make A Uncommon Look For Bare Eyes