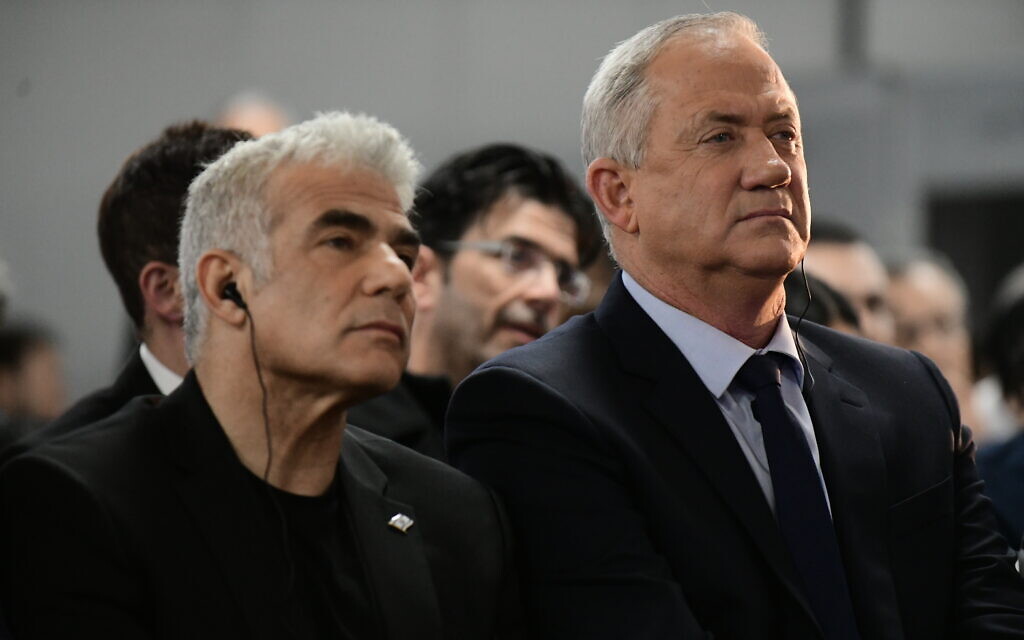 Blue and White chairman Benny Gantz said he would back the candidate best positioned to remove Prime Minister Benjamin Netanyahu from power for the premiership, following his second meeting with Yesh Atid leader Yair Lapid on Wednesday since last week’s election.

But Gantz refrained from explicitly announcing his exclusive support for Lapid, his erstwhile ally turned rival. “I will recommend to the president whoever has the best chance of forming a government, whether that is Lapid or anyone else,” said Gantz at a press conference.

In a joint statement after their talks, the two centrist politicians said they will continue to discuss the matter in the coming days.

During their meeting, Gantz and Lapid did not talk about efforts by the Blue and White leader to mediate between Lapid and Yamina party leader MK Naftali Bennett, the Kan public broadcaster reported. Gantz and Bennett have not met since the elections.

According to Channel 12, Lapid and Bennett are expected to meet by the end of the week.

President Reuven Rivlin will hold consultations on Monday with the political parties to receive their recommendations for the candidate who will be given first shot at forming the government and announce the pick on Wednesday.

Neither the pro- nor anti-Netanyahu blocs have a clear path to forming a majority coalition after the March 23 vote, the fourth national election in two years. However, the prospect of a fifth election has spurred speculation that unlikely bedfellows could come together in an effort to oust Netanyahu or, alternatively, to enable him to retain power.

Though Lapid’s Yesh Atid is the largest party in the anti-Netanyahu bloc, Bennett and Gideon Sa’ar, the leader of the fellow right-wing New Hope party, have both shown reluctance to see Lapid become prime minister.

Sources close to Lapid told Kan they believe that Gantz will eventually back the Yesh Atid leader for prime minister.

The two party leaders ran together in the last three elections, only to split when Gantz decided to form a unity government with Netanyahu last May. The collapse of that government six months later prompted last week’s elections, which again produced an inconclusive result and deepened the political deadlock. 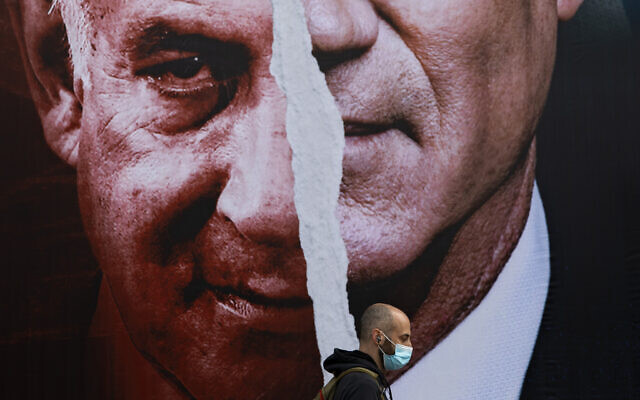 In this March. 11, 2021 file photo, an election campaign billboard for the Blue and White party, the opposition party led by Benny Gantz, right, and Prime Minister Benjamin Netanyahu of the Likud party, left, hangs on a street in Tel Aviv, Israel. (AP Photo/Oded Balilty)

Netanyahu has 52 lawmakers behind him, nine short of the 61 needed for a majority. It remains unclear whom those in the anti-Netanyahu bloc will nominate for prime minister next week.

Further chipping away at Lapid’s efforts to gain a majority of MKs to back him for premier, the Palestinian nationalist Balad party said Wednesday it will not recommend any candidate be tapped with forming the next government.

“All the candidates deny the legitimate rights of the Palestinian people and support continuing the occupation, expanding settlements, Judaizing Jerusalem and targeting Al-Aqsa Mosque and all holy sites,” the party’s politburo said in a statement. 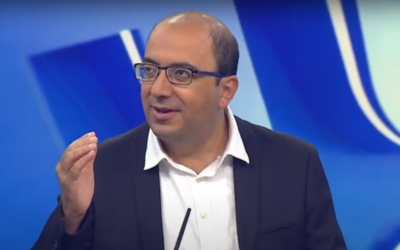 Balad, which is part of the Arab Joint List, has only one parliamentarian in the upcoming Knesset: party chief Sami Abou Shehadeh. As early as February, Abou Shehadeh had publicly insisted that he would not consider recommending Lapid for prime minister.

The party called on the rest of the Joint List to refrain from recommending anyone to Rivlin.

At his press conference, Gantz attacked Netanyahu over the failure to appoint a permanent justice minister, a post that Gantz himself is temporarily filling, as well as his being defense minister. Gantz has served as justice minister for the past several months in an interim capacity, but that term is slated to expire Thursday.

He said it will be a “dark day” as Israel will no longer have a justice minister thanks to what he claimed is Netanyahu’s efforts to block a cabinet vote on the matter.

Gantz asserted the delay over appointing a minister is proof of Netanyahu’s conflict of interest as the prime minister is on trial for corruption in a trio of cases. He said he had sent a letter to Attorney General Avichai Mandelblit asking him to examine Netanyahu’s capability to continue serving as prime minister under the circumstances.

He appealed to Mandelblit to compel Netanyahu to allow the appointment of a permanent justice minister.

“I will not allow this violation of the rule of law,” Gantz said.

The row over the justice minister saw Gantz call off a special cabinet meeting earlier this week that was set to approve a budget for further purchases of coronavirus vaccines. Netanyahu has refused to bring up for a vote Gantz’s choice for justice minister and in response, Gantz refused to convene the cabinet to discuss the vaccine acquisition.

Gantz, defending his actions, vowed that “we will not harm the health of citizens not regarding vaccines and not in any other way.”

“Blue and White will not prevent the constant supply of vaccines to the country,” he said. “We already have stocks and need to continue to buy more, but in an organized way.”


I’m proud to work at The Times of Israel

I’ll tell you the truth: Life here in Israel isn’t always easy. But it’s full of beauty and meaning.

I’m proud to work at The Times of Israel alongside colleagues who pour their hearts into their work day in, day out, to capture the complexity of this extraordinary place.

I believe our reporting sets an important tone of honesty and decency that’s essential to understand what’s really happening in Israel. It takes a lot of time, commitment and hard work from our team to get this right.

Your support, through membership in The Times of Israel Community, enables us to continue our work. Would you join our Community today?


Join the Times of Israel Community

Cuomo as soon as stated of Sukkot: ‘These individuals and their f**king tree homes’ — NYT

Biden to withdraw all US troops from Afghanistan by September 11

Jews in Ethiopia yearn for all times in Israel, as cemeteries fill and household beckons

Biden says US has sufficient vaccine for ‘each single, solitary American’...

DeSantis is looking for to advance his profession on the expense...