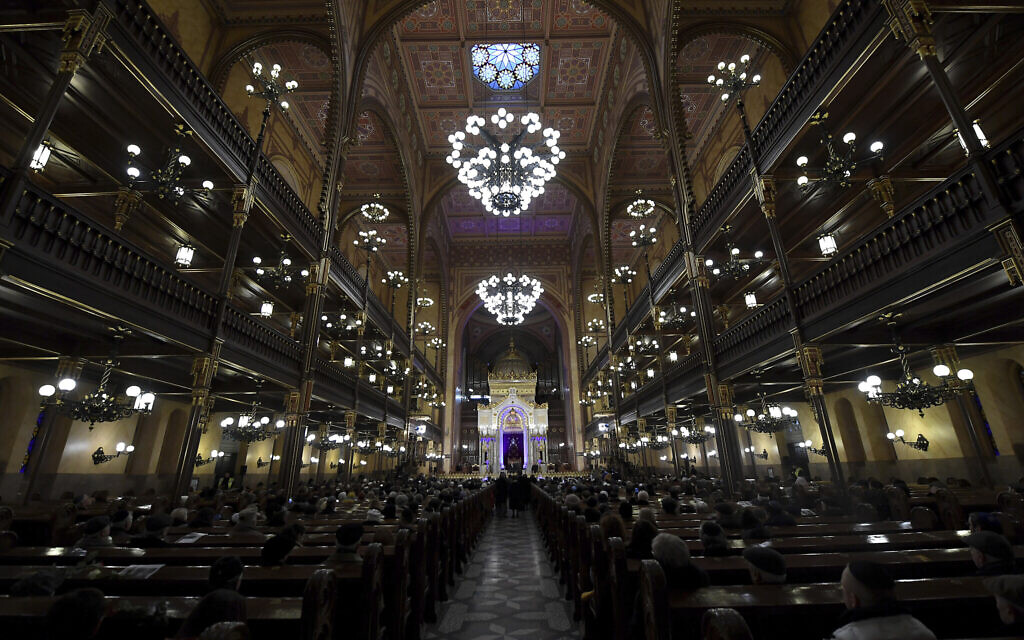 In an extraordinary attempt at overseas intervention, an Israeli rabbinical court has ordered a freeze on reparations payments by the Hungarian government to Hungarian Jewish groups, as three religious denominations disagree on how those funds are divided between them. The injunction, ordered Wednesday by the Jerusalem Supreme Rabbinate court — part of Israel’s judiciary system — is nonbinding, as the court has no jurisdiction in Hungary.

Hungary’s two officially recognized Orthodox Jewish groups turned to the Israeli rabbinical court to settle the internal communal disagreement with the much larger, progressive-leaning MAZSIHISZ Jewish umbrella organization over funds paid out per a 1991 restitution law for communal properties seized during and after World War II.

The freeze was ordered pending the outcome of the suit, for which deliberations begin on May 9.

“It says in Ecclesiastes that the ways of the Torah are ways of peace, so Torah brings peace,” said Rabbi Shlomo Koves, head of the Chabad Hasidic-affiliated EMIH organization, one of the three groups involved in the case.

“When Jews seek resolution to a dispute in a rabbinical court, that’s a way to acquire peace — and this is our hope, that the ongoing dispute in the Jewish community will come to a peaceful solution through this court,” he said.

The rift dredges up decades of trauma suffered by Hungary’s Jewish community as a whole, first in the Holocaust and then under communist rule, and reflects the radically changed demographics within the community due to genocide, politics, and the country’s shifting borders.

A 2012 agreement overseen by the Hungarian government mandated that the three groups — MAZSIHISZ, the Autonomous Orthodox Jewish Community of Hungary (MAOIH), and EMIH — would split roughly $6 million in annually distributed restitution payments.

“The communist state confiscated the property of all the different churches — Christian, Jewish, and so on,” sociologist and demographer Prof. Adras Kovacs told The Times of Israel. “After the collapse of the old system, those entities received back real estate in natura or, if they didn’t want them back, the state gave a symbolic cash sum. The communities also receive additional support in perpetuity.”

MAZSIHISZ, the largest organization by far according to most counts, receives 80 percent of the funds, totaling around $5 million. Each of the Orthodox groups receives roughly $600,000 dollars a year.

But MAOIH, which claims to have once possessed about 50% of the confiscated properties, is seeking to renegotiate this division together with EMIH.

“For many years, bits and pieces were given to the Orthodox community and it hardly had enough money to survive, let alone develop anything here,” Budapest-based MAOIH president Robert Deutsch told The Times of Israel. “Maybe this [lawsuit] will push them to sit down with us and at least start a negotiation and come up with a solution, but obviously if they’re used to receiving a certain amount of funds, it’s going to be hard for them to give that up.”

MAZSIHISZ did not respond to a Times of Israel request for comment.

The small but tenacious Orthodox community once numbered in the hundreds of thousands, but was all but decimated in the Holocaust. It now has about 50 members, said Deutsch, who runs a dental supply company and was elected to his post in January of this year.

The community has five synagogues, Deutsch said, along with a kosher butcher shop, a school of 40 students ranging from daycare to high school, and a kosher restaurant. Many of the school’s students and synagogues’ congregants come from outside the community, and large numbers of Orthodox visitors from abroad are often found at prayers or patronizing the city’s kosher eating establishments.

According to scholar Kovacs, the Orthodox community once rivaled Budapest’s robust Neolog community in size. Neolog Jewry, with which today’s MAZSIHISZ is aligned, is a liberal and modernist community similar to the Conservative or Masorti movements.

But the location of the country’s Orthodox Jews, who largely dwelled in the countryside rather than the city, played a role in their fate. 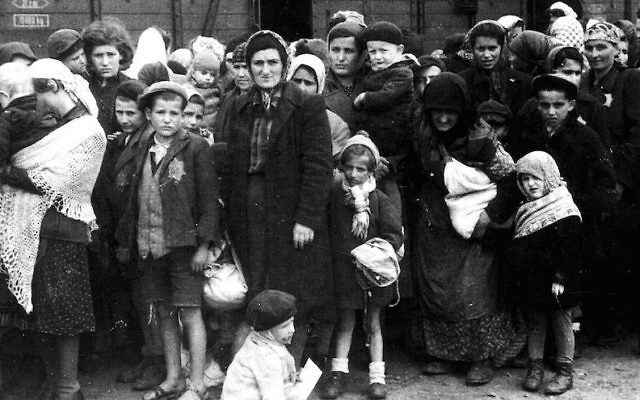 Illustrative: Jews from Hungary arriving at Auschwitz in May of 1944, part of ‘The Auschwitz Album’ series of photographs. Most of these Jews were murdered later that day. (public domain)

“At the beginning of the 20th century, the proportion of Orthodox to Neolog Jews was 50-50, but after the dissolution of the Hungarian kingdom, those territories where Orthodoxy was the dominant trend — Transylvania, Slovakia, Carpathian Ruthenia — were no longer part of Hungary,” Kovacs said. “So in the territory of Hungary proper, Neolog became the dominant tendency.”

Kovacs said that the distribution of Orthodox Jewry changed again with the Holocaust when nearly all Hungarian Jews living in the countryside were deported to concentration camps and killed. The Jews of Budapest were relatively better off, with a survival rate of about 50%.

“In Budapest, Orthodoxy was even less present than in other parts of the country, so it had a selective effect on the Jewish demographic composition and [the Orthodox] became a smaller group within Hungarian Jewry,” Kovacs said, adding that those Orthodox Jews who had remained, fled after the country’s 1956 Revolution due to religious persecution from the communist regime.

According to a 2017 study by Kovacs, who is considered the preeminent demographer of Hungarian Jewry, there are now roughly between 59,000 and 111,000 Jews of maternal descent residing in Hungary. If expanded to include those of paternal descent, that number grows to between 73,000 and 138,000.

Most of the country’s Jews do not officially affiliate with any of the three communities in question. Hungarian law allows taxpayers to divert 1% of their taxes to a government-recognized religious body. There are three Jewish options to choose from — MAZSIHISZ, EMIH, and MAOIH — but only 12,000 taxpayers donate to the Jewish organizations, said Kovacs, calling this the “only objective number” by which to determine religious affiliation.

(In 2011, Hungary’s self-described “illiberal” Fidesz government enacted a controversial law granting privileges and benefits only to government-recognized religious groups, while depriving unrecognized churches — including the Jewish Reform denomination — of legal status and the rights that come with it.)

Of the charitable funds collected, about 70% go to MAZSIHISZ, 30% to EMIH, and a nominal amount to MAOIH, Kovacs said. The 2012 agreement between the three communities divided the Hungarian government’s reparation funds more or less according to this proportion, he said. 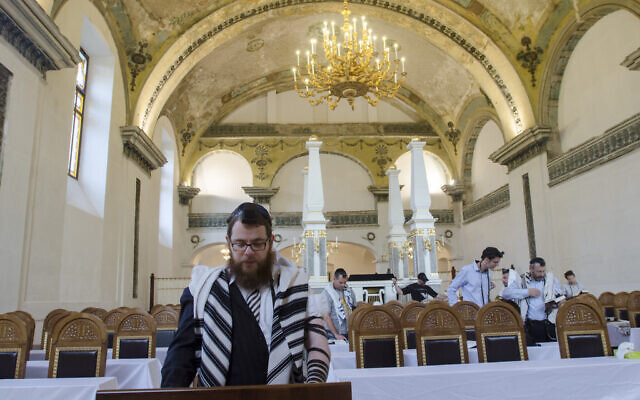 But Koves said it didn’t make sense to tally a community’s membership by the tax law alone.

With 11 synagogues and thousands of people participating in activities on a semi-regular basis, Koves said that his organization is responsible for a great deal of Hungary’s Jewish revival.

“I’m emphasizing the activity our organization is doing now,” he said. “The funds are not just financial restitution, but are also for the purpose of rebuilding Jewish life, because the government doesn’t stop [after repaying the full value of the seized properties], the payments go on forever.”

MAZSIHISZ head Andras Heisler agreed with the logic, if not the conclusion. 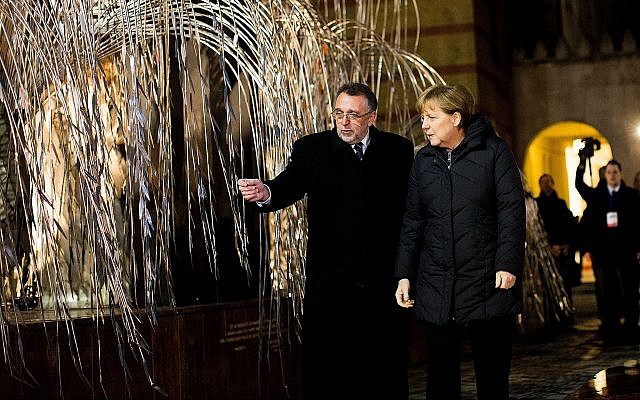 “We believe the money should be distributed based on the work that the communities are doing today, not 80 years ago,” Heisler told The Times of Israel a day before the injunction. “The situation has changed — the Orthodox community is small, and the Neolog community is big. And we use this government money — as do EMIH and MOAIH as well, of course — to help the community, but our point is that we are the largest group and we cover most of the Jews here.”

Heisler highlighted the work his organization is doing for the greater Hungarian community, including by turning a small charitable MAZSIHISZ-run hospital into a COVID-19 vaccination center. Between 500 and 800 people are getting vaccinated daily, Heisler said, for a total of 20,000 jabs in the last few months.

But will it hold up in court?

The MAZSIHISZ head also questioned the seriousness of the lawsuit.

“They’re trying to circumvent Hungarian law,” Heisler said. “This was a contract signed by three independent Hungarian Jewish communities and officially endorsed the Hungarian government. And now this contract is being attacked by EMIH and MAOIH out in a foreign country by a rabbinical court. We don’t understand how a rabbinical court is higher than Hungarian state law, or why this is even a clerical issue.”

But to the Orthodox Deutsch, the answer seemed clear. “Jewish communities belong to the Jewish court — if we can, that’s what we try first,” he said.

“Also, the Hungarian government probably doesn’t want to be involved with this directly at this stage,” Deutsch said. “And we are hoping that a Jewish court can influence the Jewish communities in Hungary, since we don’t have a rabbinical court.”

When questioned why the communities don’t take the matter up in a European rabbinical court, Deutsch said that he was advised to take the matter to Jerusalem by his rabbis, while declining to name them.

For his part, Heisler conceded that were the court proceedings to go through, they could have an adverse effect for his organization. 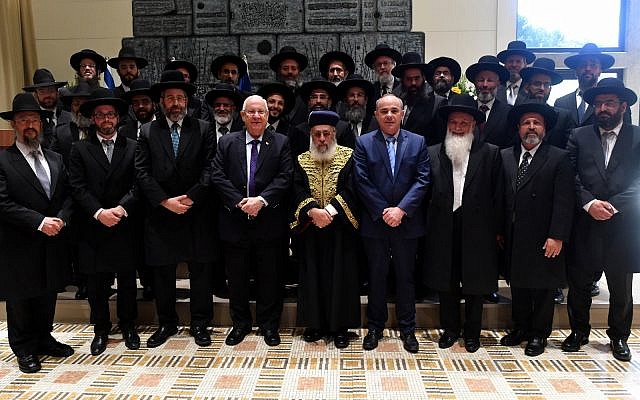 Illustrative: 24 new rabbinical judges are sworn in at the President’s Residence in Jerusalem on October 15, 2018 (Kobi Gideon/GPO)

“If the court reaches a certain decision, it could influence the Hungarian state and there could be a movement to change the status quo in the Hungarian government,” Heisler said. “But this is my personal opinion. We are a democratic organization, and the final decision on whether to participate in the rabbinical court proceeding will be decided by our board or the general assembly.”

Heisler also noted that the Israeli rabbinical courts are strictly Orthodox and overseen by the country’s chief rabbi, who thrice neglected to inform Heisler’s large liberal Jewish organization of visits to Budapest in recent years.

“Ashkenazi Chief Rabbi David Lau visited Hungary three times, and not once did he inform my organization that he was coming,” said Heisler. “He came to Budapest, visited the prime minister together with EMIH, and afterward we saw it in the newspaper.”

“I wrote him a letter saying that this isn’t proper, that if you’re the Ashkenazi chief rabbi and you come to Budapest, please inform us. At least let us invite you to sit down for a coffee — we are the biggest Jewish community in East-Central Europe. And the second time he came, nothing. The third time, nothing. So while this is not a religious court ruling per se, it’s a very strong sign for us,” he said.