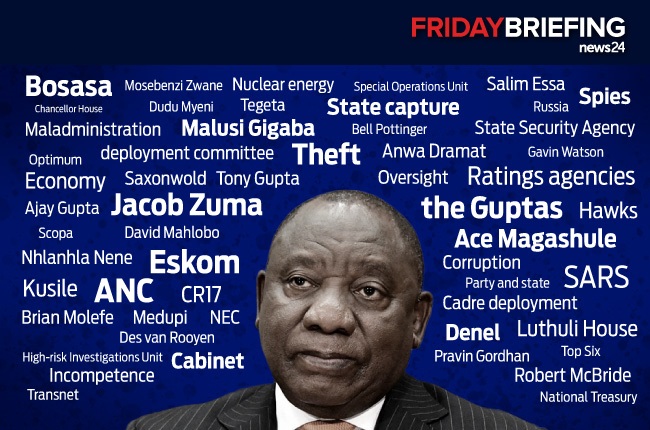 Ramaphosa at the Zondo commission: Burning questions he needs to answer

President Cyril Ramaphosa will appear at the Judicial Commission of Inquiry into State Capture in his capacity as president of the ANC next week. He will return to the inquiry in May to testify as head of state as well his tenure as deputy president of the country under Zuma.

Earlier this month, ANC chairperson Gwede Mantashe appeared at the inquiry on behalf of the party, which has been heavily implicated in state capture. Mantashe’s testimony proved why the inquiry needs to turn its focus on the ANC.

The Zondo commission has been looking into state capture while Zuma was president. This includes the former president’s  relationship with the infamous Gupta family, who came onto the country’s radar in 2013, when it was revealed that they had been allowed to land an aircraft at Waterkloof Air Force Base for guests attending a wedding at Sun City.

Zuma is currently embroiled in a battle with the commission about his appearance at the inquiry, with the inquiry going as far as taking the matter to the Constitutional Court.Allegations of state capture have deeply dented investor confidence and has also impacted on citizens and the trust they have in the government.It is now up to Ramaphosa to rebuild that trust. Will he answer truthfully, or will he claim ignorance as we have seen before?In this week’s Friday Briefing, News24’s readers and editors identify 100 questions that they believe Ramaphosa must answer. We also have submissions from News24’s specialist legal writer Karyn Maughan, analysts Ivor Chipkin and Mpumelelo Mkhabela and Conversations editor Jabulani Sikhakhane. Fin24’s Khulekani Magubane and News24’s Jan Gerber also give their views on what they think Ramaphosa should account for.

President Cyril Ramaphosa will appear at the Judicial Commission of Inquiry into State Capture next week. His appearance will be in his capacity as leader of the ANC, and not as head of state. News24 asked its readers, with the help of our editors, to identify 100 questions they believe Ramaphosa should answer.

The untouchable Arthur Fraser: Why has Ramaphosa not acted against Zuma’s spy boss?

Despite all the evidence that has been revealed at the state capture commission indicating the State Security was politicised, President Cyril Ramaphosa has not taken any action against those implicated. Karyn Maughan asks why.

Will President Ramaphosa be ready to stand up to the ANC’s Ramaphosa?

Ivor Chipkin writes that corruption in government has happened because the ANC reproduced aspects of the homeland system and spread it across the state.

What kind of witness will Ramaphosa be at the state capture commission?

Mpumelelo Mkhabela breaks down the categories of witnesses appearing at the Zondo commission and asks whether Cyril Ramaphosa will prove to be what he defines as a category five witness when he testifies next week.

While the importance of a sitting president appearing before the state capture inquiry should not be understated, it is the content of Cyril Ramapahosa’s testimony that could have a ripple effect, writes Khulekani Magubane.

Ramaphosa at Zondo commission: What did he know? And what did he do to stop state capture?

A master of vagueness and sugar-coating, President Cyril Ramaphosa has dodged questions about state capture publicly for years. The countless questions he will face next week and in May when he appears at the Zondo commission should boil down to two, writes News24 parliamentary reporter Jan Gerber.

Ramaphosa before Zondo: The ultimate tightrope

President Cyril Ramaphosa will find himself walking a tightrope when he appears before the state capture commission, as he weighs up his own accountability in the Zuma administration against his political reputation, writes Jabulani Sikhakhane.

To receive Friday Briefing, sign up for the newsletter here. Now available to all News24 readers.