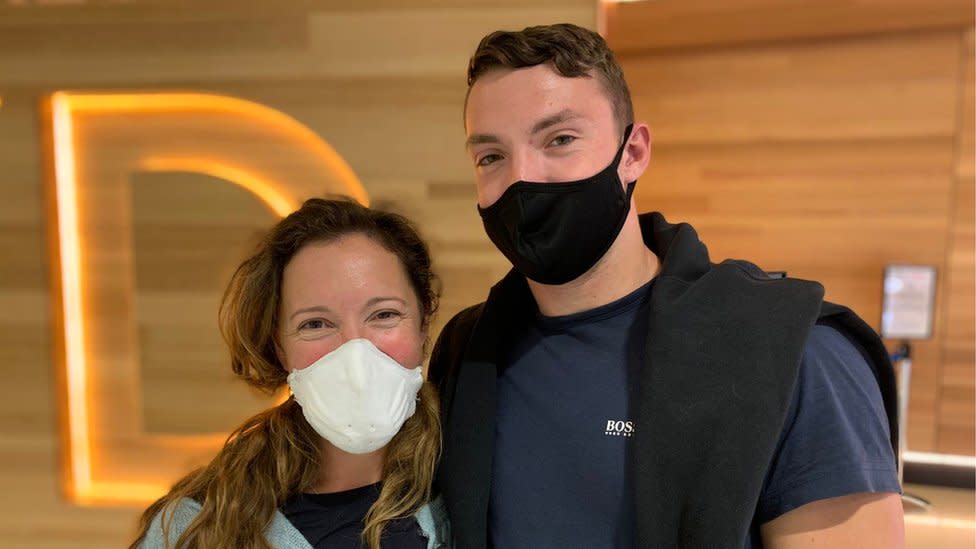 Tearful reunions filled Auckland airport on Monday as residents from Australia were able to travel freely to New Zealand for the first time in more than a year.

Thousands of passengers were booked to fly between the two nations on Monday.

Both countries have contained Covid outbreaks and kept infection rates low, largely due to tight restrictions.

Excited passengers crowded airports in Australia for flights to various parts of New Zealand on Monday, with some rising before dawn to get ready to board.

“I didn’t realise how emotional I was going to be today,” passenger Dawn Tratt told the BBC at Sydney airport.

While many buzzed with the anticipation of seeing loved ones, for others it was a more sombre occasion.

“My older brother passed away last week on Thursday, we couldn’t get there last week, but it’s given us an opportunity to go back home today without quarantine so it’s good, very good to go and lay him to rest,” said John Palalagi in Sydney.

Australia and New Zealand shut their borders in March last year and brought in compulsory quarantine for returning nationals.

Since October, New Zealand travellers have been allowed to enter most Australian states without quarantine, though this had not been reciprocated amid concerns about sporadic Covid outbreaks.

To fly under the bubble’s rules, passengers must have spent 14 days before departure in either Australia or New Zealand. They must not be awaiting the results of a Covid test, nor have any Covid symptoms, amongst other rules.

The international departure terminal at Sydney airport was very busy, very early in the day. The queue in front of the check-in desk was long and spiralling. Many parents tried to entertain exhausted toddlers who had to wake up exceptionally early to catch the first flight from Sydney to Auckland on Day 1 of the trans-Tasman bubble.

Some passengers told me they camped outside from 02:00 local time (Sunday 17:00 GMT) before the airport had even opened. Others said they were so excited they couldn’t sleep. The first Jetstar flight was absolutely full.

It’s a big day for airlines after a catastrophic year because of Covid, and a big sigh of relief for both the travel and tourism industries. But really, this moment is about friends and family reuniting with their loved ones for the first time in more than a year.

Dawn Tratt’s voice broke a little as she spoke to me ahead of take-off in Sydney. Her cousin is unwell and while this is a hard time for her family, she’s glad she’ll be able to be there for her.

“We’re so privileged here in Australia and in New Zealand to be able to travel like that. It’s weird being on a plane again,” she smiled through her tears.

“It is truly exciting to start quarantine-free travel with Australia. Be it returning family, friends or holiday-makers, New Zealand says welcome and enjoy yourself,” Ms Ardern said.

The country relies on Australia for 40% of its international tourism, injecting about NZ$2.7bn (£1.4bn, $1.9bn) into the economy.

In the other direction, New Zealanders accounted for 1.3 million arrivals to Australia in 2019, contributing A$2.6bn (£1.46bn; $2bn) to the Australian economy.

Qantas, Jetstar and Air New Zealand will all fly routes between the two countries.

Still, the leaders warned the trans-Tasman travel bubble will be under “constant review” given the risks of quarantine-free travel.

Both nations have won praise for their handling of the Covid pandemic. Strict border controls and snap lockdowns are among the measures that have kept infection rates low. Australia has recorded 910 deaths, and New Zealand 26 deaths.

Despite its success in containing outbreaks, the Australian government is facing growing criticism over delays in its Covid vaccination rollout. The country has fallen far behind other nations and failed to meet its immunisation targets. The delays are likely to slow any further easing of border restrictions.