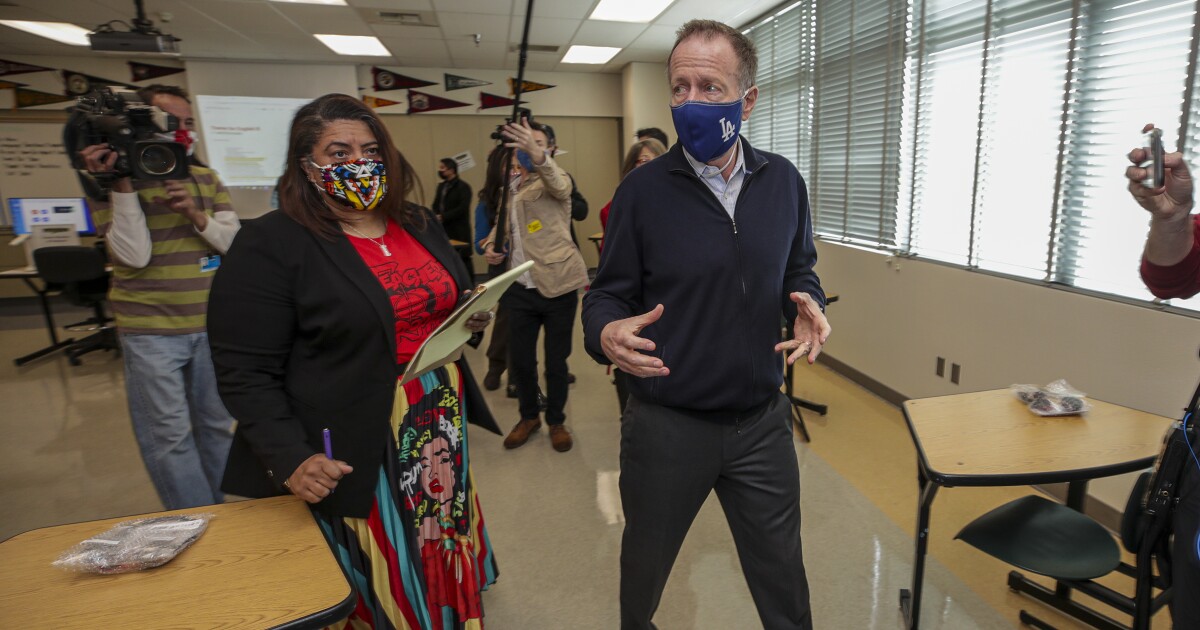 Los Angeles school officials recommend abandoning an effort to extend the next school year by two weeks in the face of opposition from employees and lukewarm parent support.

District administrators signaled their retreat in reports filed in advance of Tuesday’s Board of Education meeting.

“Based on extensive stakeholder feedback … a districtwide extension of the school year for additional student and educator learning time will not be possible at this time,” stated a staff report signed by Chief of Human Resources Linda Del Cueto and Chief Academic Officer Alison Yoshimoto-Towery.

Senior district administrators had pushed for the extension, which would have included extra learning time for students and training days for teachers.

“Extending the academic year with additional high-quality learning time for students and transformational learning for educators is a critical need for students, in particular those who live in high-needs communities,” according to the district report.

“District staff explored with UTLA leadership a variety of alternatives to accomplish this, including starting the school year early, regular Saturday school, longer school days, or shortening existing breaks which occur at Thanksgiving or in January,” the report stated. “Unfortunately, all were rejected.”

In an interview last week, teachers union President Cecily Myart-Cruz spoke of educators who have been strained by more than of year of instruction amid the COVID-19 pandemic.

“I do feel like folks are exhausted,” Myart-Cruz said. “We have some great educators that are doing amazing work. But I do recognize that we’ve had lots of upheaval during the course of this year. And I don’t want to downplay that.”

Campuses closed on March 13, 2020, forcing an immediate shift to online instruction. They began to reopen the week of April 12 this year, resulting in additional challenging adjustments.

The union leadership opposed an extension based on a survey of members: 75% of members responded; 76% of those opposed extending the school year, according to the board report. Myart-Cruz reported the numbers more generally in a Friday broadcast on social media.

“We took that message into bargaining,” Myart-Cruz said in the broadcast. “There is good intent behind the school year extension, but without sufficient planning … the district would be spending money inefficiently without having a measurable impact on student learning, or social emotional well-being.”

She added: “Here’s what I keep hearing from parents and educators alike. We cannot follow the most stressful and emotionally traumatic year our learning communities have ever had with the longest school year we’ve ever had.”

The district had previously released the results of a parent poll representing 76% of students. Of those, 44% wanted no change to the calendar, 29% favored starting school two weeks earlier and 27% favored starting one week earlier and also shortening the three-week winter break by one week. Ultimately, district staff proposed adding six school days and four teacher-training days.

District officials said they would look to other opportunities, presumably optional, to help students in the wake of a pandemic that some experts say has academically harmed many students, especially those with special needs, including students learning English and those with disabilities. California parents also have expressed concern that their children are falling behind.

“Each school will design an evidence-based plan to provide extended days/time,” according to slides in a district presentation. Proposed areas of focus are: learning acceleration in math and English; “social emotional learning and community building,” and “unconscious bias training and plans to accelerate racial equity.”

Associated Administrators of Los Angeles, whose members include principals and assistant principals, also conducted a poll. Within that union, 27% of members responded. Of those, 62% wanted no change to the instructional calendar, and overwhelming majorities wanted to maintain the current length of the winter and Thanksgiving breaks.

The Board of Education is scheduled to consider next year’s calendar at its Tuesday meeting. It has the option of rejecting the staff recommendation and sending the district team back to negotiations with the teachers union, but that’s unlikely.

District officials also are ironing out a plan for summer school. They have indicated that, most likely, students will have the option of a hybrid on-campus schedule similar to what was rolled out last month. Under that format, students spend about half of their school week on campus. The district plans to make summer school available to all students, but it would be optional both for students and teachers.