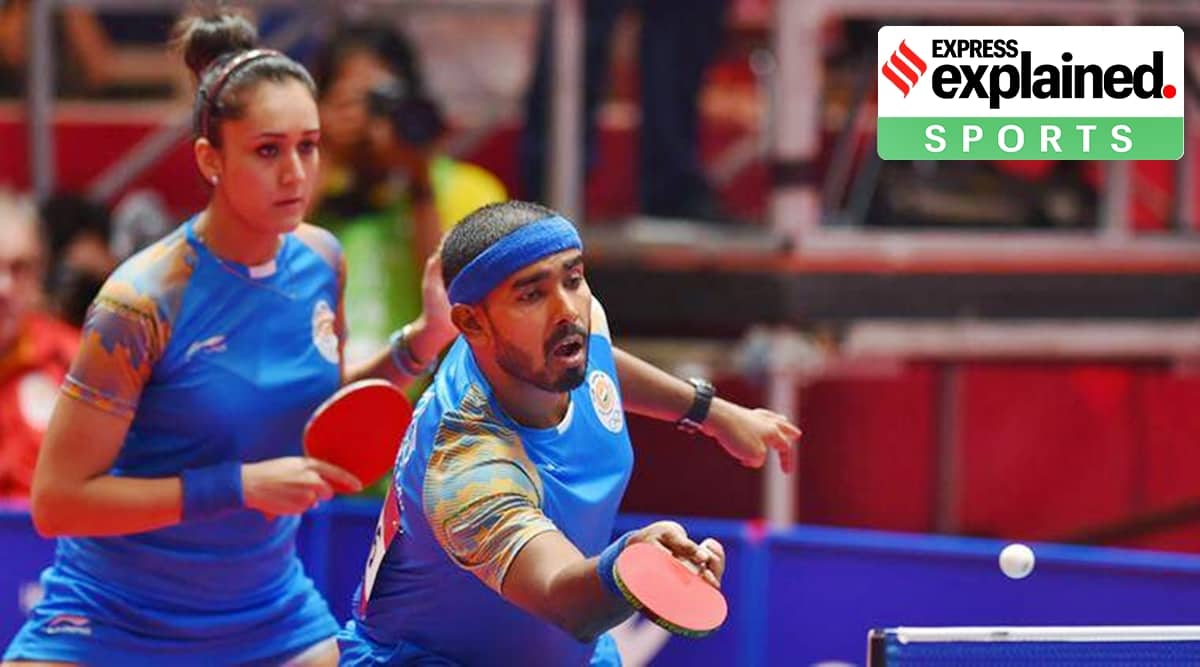 One common strategy of the women paddlers is the use of pimpled rubbers on one side of their bats or racquets.

Batra’s in particular is the long pimpled, or long pips, rubber – a defensive selection that is a rare choice among the game’s elite today.

To her credit, the Khel Ratna has learnt how to make that defensive rubber (which she uses on her backhand side) come alive in matches, helping her lead the women’s team to its first-ever gold medal at the Commonwealth Games in 2018.

The long pimples aren’t completely obsolete from the game, but it is now mostly a remnant of a time when craftiness was popular and rewarding.

There are different types of rubber surfaces used on a bat. One of them is the long-pimpled surface. A ‘pip’ is a conic-shaped raised bump. Like the name suggests, the pips on this type of rubber are long and thin, and bend when they come into contact with the ball.

This rubber is generally used by players on their weaker backhand side.

How does it work?

According to equipment manufacturer Butterfly’s website: “Long Pip rubbers are generally used by players who rely on their opponents to make mistakes. The composition of long-pip rubbers is similar to short-pip rubbers, but the pips are taller. When your opponent’s ball contacts this surface, the taller pips are easily bent, reversing the oncoming spin.”

Playing somebody who uses a long-pimpled rubber can be confusing based on the shot action. If a player closes the racquet face and plays the shot with a down to up motion, you may expect a topspin shot. If it’s an open face and played up to down, then backspin.

However, the effect the long pimple has is regardless of the motion. Instead, the outgoing spin relies on what comes from the other end of the table.

For example: if a shot comes with topspin, and a long-pip player plays a topspin motion return, the nature of the rubber will actually reverse the spin and send the return with backspin.

To a certain extent, the rubbers on the international stage are effective, but more so against lower-ranked or junior players.

“It’s very difficult to sustain it at a senior level, and the number of players using it reduces as you grow,” says 2008 Olympian Neha Aggarwal, who also used long pimples.

“Eventually, you cannot just rely on this rubber to win. You need more skills. (The reverse spinning effect) might help you create an opening, but you have to have the eye and skill, and a normal flat rubber to kill off a point.”

One of Batra’s tactics has been to switch the side of the bat mid-rally to change between long pimple and flat rubbers (for powerful strokes), a strategy often used by players using long pimples.

Is the long rubber popular?

It used to be. Former World No.1 Deng Yaping of China won nine World Championship titles (singles, women’s doubles and team) and four Olympic titles (in singles and doubles in 1992 and 1996) using the long pimple.

Long pimples are a rare feature today, used by defensive players if used at all. Most pimpled rubbers that are seen now are the short pips – which are considered attacking rubbers. Sutirtha Mukherjee uses this variant, as does current World No.3 Mima Ito of Japan.

Why has its popularity diminished?

Players have become aware of the behaviour of pimpled rubbers and play accordingly, reducing the element of surprise.

Crucial in reducing the rubber’s popularity was the rule the International Table Tennis Federation (ITTF) introduced on July 1, 1986, making it compulsory for a bat to have a different colour on each side – red and black. Before that, players could use the same colour on both sides making it almost impossible for an opponent to distinguish which rubber is being used for what shot.

Additionally, the ITTF, in a bid to increase the number of rallies per point, increased the size of the ball from 38 mm diameter to 40 mm diameter after the 2000 Sydney Olympics – according to the BBC, this was the first change introduced to either table, net or ball since 1937. The slightly bigger ball made it harder to get spin, even when using long pimples.

“Players have also become physically much stronger on both wings, and so it does not give those using this rubber any openings anymore. Players now have more weapons,” adds Sathiyan’s coach and former national champion S Raman.

“Tables have also become much faster. The surface is smooth so it has less friction, meaning the ball spins less on the bounce. So these conditions have made it difficult to sustain if you’re using a long-pimple rubber.”