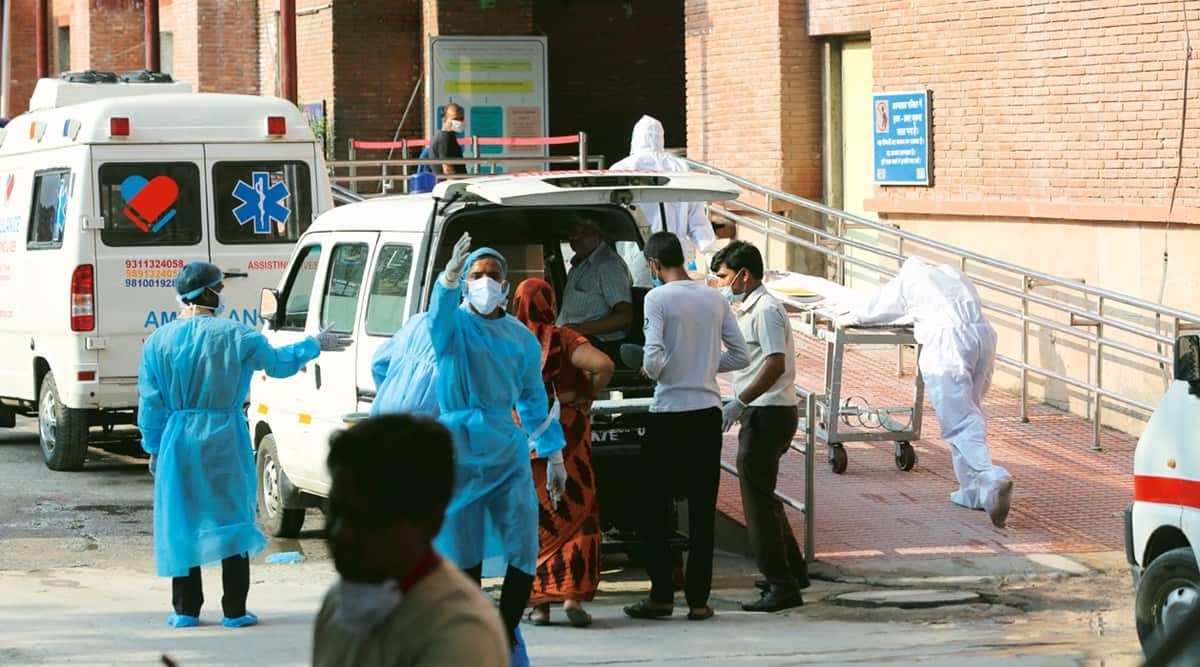 Until a few weeks back, Nalasopara-based Shaikhs were one happy household, making plans for a wedding in the family. But things took a turn for the worse towards the end of April when three sisters in the family started showing symptoms of Covid-19. What followed was a hectic scramble for a hospital bed, key drugs like remdesivir and tocilizumab, ventilator, and a huge sum of money for treatment. However, it all came to naught with two sisters succumbing to the infection one after the other, and the third still in a severely ill condition.

Brothers Ahmad Shaikh, an auto driver, and Ali, a paan stall owner, are crestfallen at the loss of their siblings, one of whom, 35-year-old Shakeela, Shaikh saw gasping for breath and succumbing to the disease in front of him outside a municipal hospital in Virar, 65 kms from Mumbai, waiting for a bed on April 25.

Nine days later, on Tuesday morning, they were back outside a hospital mortuary to collect the body of their elder sister Talmunissa (50). Her only daughter was slated to be married after Eid.

The family’s hapless situation is a testimony to what a strained healthcare system in Mumbai’s satellite town looks like, forcing people to go to Mumbai for treatment, where they are greeted with struggles of a different kind.

Recalling the nightmare his family has gone through in the last week, Shaikh says Talmunissa was admitted in the intensive care unit in Jai Ambe hospital, Mira Road, 30 kms north of Mumbai on April 25 but the same night, the hospital reported oxygen shortage asking him to move her elsewhere. He managed to find an ICU in Sunrise Hospital but was asked to submit Rs 1 lakh as an advance deposit, despite the state government directing private hospitals not to demand an advance.

“I began borrowing money. We had exhausted all our savings on ration. We collected Rs 60,000 and begged hospital to admit her, they agreed,” said Shaikh, whose income has dwindled since the second lockdown began. Shaikh has been unable to run his auto, while his brother Ali has had to keep his paan shop closed.

A day later, Sunrise Hospital asked the family to arrange for remdesivir and tocilizumab injections. “We are requesting Food and Drug Administration every day for vials, they are supplying no stock,” said senior doctor Nitin Pardeshi, a part of the hospital administration.

The family began hunt for the drugs and Ali was told by a hospital staffer that he could get tocilizumab from black market for Rs 45,000. “We began collecting funds for the injection,” he said. But eventually, the family could source neither of the drugs.

By March 27, the hospital asked the family to shift Talmunissa to a tertiary hospital with ventilator support. Pardeshi said Talmunissa’s lungs were damaged. For three days, the brothers reached out to multiple hospitals looking for a ventilator bed.

Mira Bhayander Municipal Corporation (MBMC) has only 40 ICU and ventilator beds in all of its Covid hospitals, all running to full capacity. Shambhaji Panpatte, deputy municipal commissioner in MBMC, said they plan to scale up to 100 ICU beds soon.

On April 30 morning, Shaikh got a ventilator bed through BMC commissioner Iqbal Singh Chahal’s intervention in Nair Hospital in central Mumbai. A senior BMC official said they are catering to a large patient load from adjoining districts where hospital infrastructure remains poor.

But here, Shaikh was met with another problem: Sunrise Hospital refused to discharge his sister until he paid a bill of Rs 1.86 lakh. “We deliberated on selling our flat since that is all that was left for mortgage,” Ali said.

By afternoon, NGO Helping Hands Charitable Trust intervened. Activist Bilal Khan collected donations, bargained with the hospital and paid a bill of Rs 1.40 lakh. Talmunissa required a cardiac ambulance — a private ambulance that was available said it did not have enough oxygen to make the journey till Mumbai. So, a government ambulance was arranged by evening, BiPap machine was borrowed from Sunrise Hospital and by night, 10 hours after BMC allotted a bed, Talmunissa was shifted to Nair Hospital.

“The Sunrise Hospital had flatly refused to allow the patient to leave without full payment. When they moved her to ambulance, for full five minutes she struggled to breathe. They had removed oxygen,” said Khan.

Panpatte, from MBMC, said an audit of hospital will be undertaken for demanding deposit.

Pardeshi, for his part, said the hospital was only following the rules of admission and discharge.

A senior doctor at Nair Hospital said Talmunissa’s condition had turned critical by the time she was admitted there. Her oxygen saturation level improved briefly a day later, but by Tuesday morning, the Shaikhs got a call that her oxygen was rapidly declining. Her daughter Ziya Fatema (27) was at home — she is also Covid positive and requires intermittent oxygen support through cylinder. Shaikh rushed to hospital, and Ali who slept outside on hospital footpath rushed to the Covid ward. By 4.30 am, Talmunissa had passed away.

Doctors said they administered remdesivir on May 1 but it was too late.

Her family saw her body, sealed in transparent plastic, nine hours after her death. When they reached the cemetery, officials refused to bury the body — The paperwork was incomplete, some hospital stamps were missing. A senior medical officer from Nair Hospital immediately arranged for a staffer to ride down to the cemetery to stamp all papers. The cemetery had a waiting list of two hours after that. The family paid Rs 8,000 for her burial.

Ziya Fatema kept crying outside on a chair. “Her father died a few years ago, and now her aunt and mother. The second aunt is also serious,” said a relative.