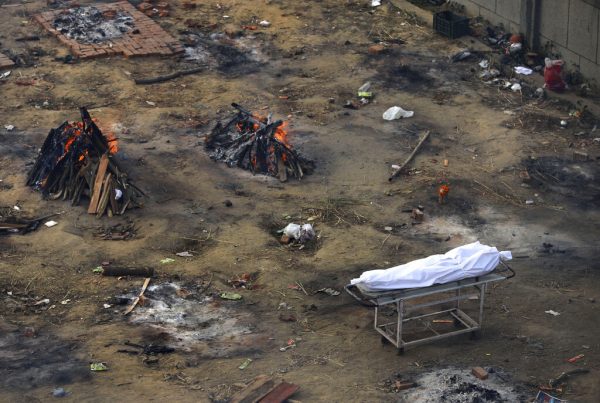 Since campaigning for prime minister for the first time in 2013-2014, Indian Prime Minister Narendra Modi’s argument for seeking and staying in power has involved several slogans: “good days are coming,” “development of all, appeasement of none,” “minimum government, maximum governance,” and so on — all of them building on his pledge of “good governance.” His Bharatiya Janata Party’s (BJP) public relations machinery, along with friendly media organizations, have amplified this persona of a man of action. They project Modi as a decisive figure, a man who gets things done on “a war footing,” who picks up the phone and cuts through the red tape. “If there is Modi, there is a way out,” they say.

India is still waiting to find out just what that way out looks like amid a devastating second COVID-19 wave.

Over the years, several episodes have challenged Modi’s cultivated image of good governance. There was the 2016 demonetization of 86 percent of India’s currency, which wreaked widespread economic havoc. Before he became prime minister, there was the 2002 anti-Muslim pogrom in the state of Gujarat, where he was chief minister. The ongoing COVID-19 wave, however, has punctured Modi’s self-inflated balloon of good governance as never before. The destructiveness of his governance — the Hindu nationalist culture wars, the authoritarianism, the misinformation that have been hallmarks of his years in power — has become apparent with particular starkness. The Indian people are paying the price. And, as has often been the case under Modi, they are paying the price with their lives.

When the pandemic first struck India last January, given the virus’ relative mysteriousness at the time, one could give the Modi government some legroom over its mismanagement then. Even a charitable view, however, could not pardon the unplanned, draconian, destructive lockdown that he announced on March 24, giving the country of 1.38 billion an advance notice of just four hours, that too at night from 8 p.m. to midnight. Just one of the outcomes was a year-on-year GDP contraction of 23.9 percent in the first fiscal quarter of 2020 (April-June 2020). This shock came to an economy that was already reeling under a 45-year high unemployment rate of 6.1 percent.

Yet, if any excuses could have been granted with the first wave, the second wave has come a year hence, and much lesser legroom can be justified now. It is not a mystery that pandemics involve multiple waves and mutations, with second waves often the most potent. So, should the government not have been prepared for the eventuality — now a reality — of a sudden, spiraling demand for medical supplies? Should it not have focused on the possibility of a pandemic seemingly under control this January and February, but which could quickly take a turn for the worse in March and April? Should Modi and his colleagues — with their skill in PR –not have adequately signaled safe behavior?

The Modi model of governance however, as critics have cautioned for years, involved other priorities, and with them a specific set of approaches to governance. Today that the shell-like quality of that model, and its capacity to inflict human suffering, is visible more than ever.

Amidst the escalating pandemic, Modi and his number two, Home Minister Amit Shah, prioritized the reckless, ruthless pursuit of power in ongoing state elections, particularly in West Bengal. As recently as April 17, Modi conducted a rally where he admired the crowd size: “Wherever I can see, I can only see people, I can’t see anything else,” he exuded, as the packed gathering cheered. Meanwhile, Shah has carried out teeming “road shows,” involving hundreds of supporters about his chariot-like vehicle, he himself and most of his supporters eschewing masks. The Modi-Shah duo has long epitomized an amoral pursuit of power: power for power’s sake, politics as a sport of conquest, no matter if their methods worsen a pandemic, no matter if people die. As the journalist Shekhar Gupta noted, while Modi was gushing at a rally that he had “never seen such a big crowd ever,” people at crematoria and burial grounds across the country, too, were saying that “we have never seen such crowds of dead bodies ever.”

Ignoring Modi and Shah’s own culpability in the ongoing catastrophe, the Hindu nationalist ecosystem that the duo has fostered has allocated blame for the pandemic based on people’s religions. Last year in March, when a Muslim gathering of about 4,500 congregated in Delhi, Hindu nationalist media and social media warriors took to using terms such as “corona jihad.” Soon enough, anti-Muslim vigilante violence broke out. However from this January to April, a Hindu gathering involving millions, the kumbh mela, has been taking place in Haridwar, with no such finger-pointing. Through its discriminatory treatment of Muslims, the Modi approach to governance has repeatedly taken aim at the country’s social fabric. One just has to wonder: Were the kumbh mela a gathering of Muslims, would BJP apparatchik not have referred to the attendees as “jihadis,” as “Pakistani agents?”

Such ruthless, divisive politics might have been tempered were key institutions of the country functioning independently. But a key feature of the Modi model of governance has been the crippling of institutions. From the Election Commission to the courts, from investigative agencies to the media, key pillars of Indian democracy have appeared to function simply as stamping agencies for the wishes of the government. For instance, analysts widely agree that the Election Commission has operated in a markedly pro-BJP manner in the ongoing state elections. It has set voting dates, chastised campaign rhetoric, and much else, in a partisan manner.

In place of institutions has come a cult of personality. As Indians have been getting vaccinated, their vaccine certificates have borne prominent images of Modi, in the same way as Modi images dot the landscape, from petrol pumps to airports. In February, India’s head of state, President Ram Nath Kovind, announced the renaming of a cricket stadium as the Narendra Modi Stadium. In the same month, the BJP passed a resolution stating that the country had “defeated Covid under the able, sensitive, committed and visionary leadership of Prime Minister Shri Narendra Modi.” Even as Modi cultivated this image of omnipresence and omnipotence, he has not held a single, substantive press conference during his seven years in power, carefully managing the narrative about him through a pliant, harassed media. The net result has been that rigorous, rational, accountable governance has been replaced in good part simply by PR management.

In the last few days, the devastating consequences of these features of the Modi model of governance have lit up Indian social media. People both ordinary and powerful have been pleading on Twitter for medical oxygen supply for their loved ones. Hospital administrators have been tweeting about the single digit hours of oxygen left –even as their numbers of patients overflowed. A journalist live tweeted his death as his oxygen ran out. The Modi government had a year to prepare for, and prevent, such dystopia.

That the government’s priorities were askew is apparent from horrifying statistics — even if they are vast underestimations as they are understood to be. In recent days, India has been crossing 300,000 new COVID-19 cases a day — each day marking a single-day record for any country since the pandemic began. The country’s COVID-19 death count has scaled more than 3,000 per day.

Throughout his career, Modi has been a “Teflon politician,” no policy failure bringing him electoral pain. Now, he may face electoral consequences. People are recognizing that none of the culture wars, the strongman style, the media management has helped with the on-ground, tangible reality of governance during a pandemic.

In the face of a parent hospitalized or a friend no more, people are asking how their dismal reality and the seven years of Modi’s rule relate with each other. The Modi magic is increasingly looking like a transparent trick to many.

‘First in, first vaccinated’: Why it’s best to register on your...