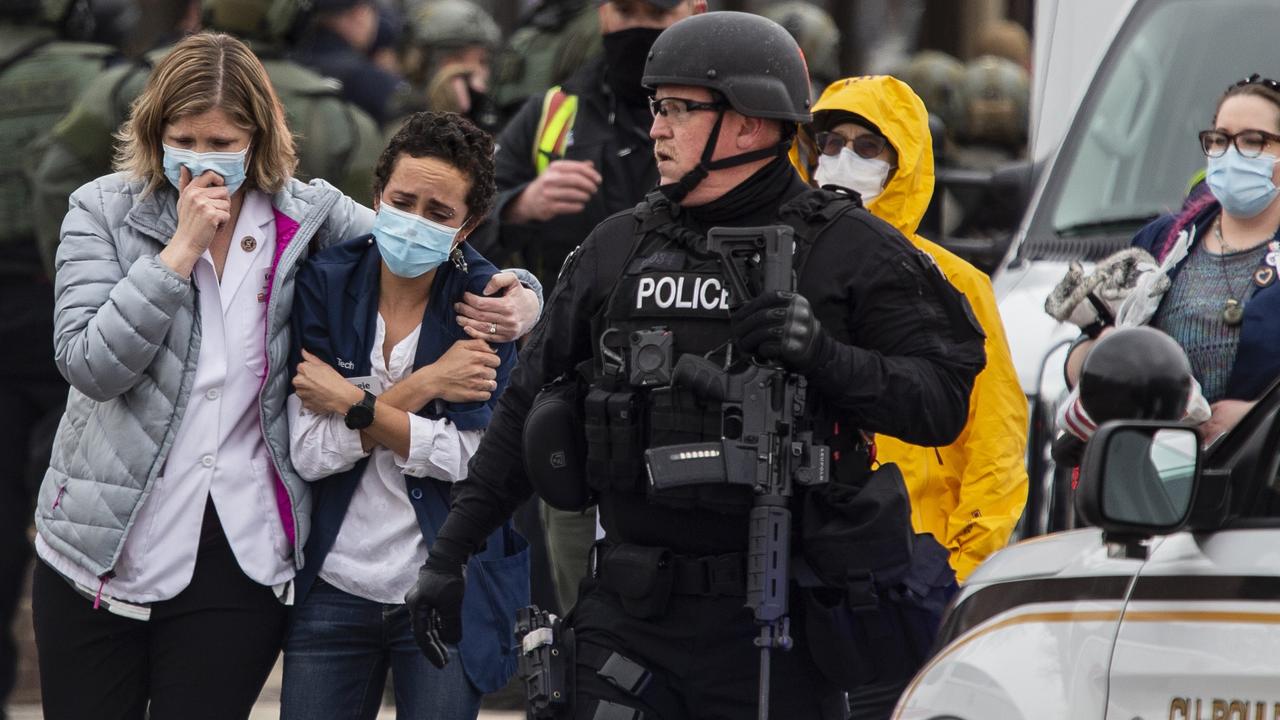 Police have identified the man accused of killing 10 people in a mass shooting at a grocery store in Boulder, Colorado yesterday.

Police in have identified the man accused of killing 10 people at a supermarket in Boulder, Colorado yesterday.

Ahmad Al Aliwi Alissa is a 21-year-old from Arvada, Colorado, which is a suburb in Denver. It’s about 30 kilometres south of Boulder.

He has been charged with 10 counts of first degree murder.

Alissa allegedly entered a King Soopers store at about 2:30pm on Monday, local time, and opened fire with a semiautomatic weapon.

Police arrived on the scene and surrounded the supermarket before exchanging gunfire with the suspect. One officer, 51-year-old Eric Talley, was killed.

At a media conference this morning, Boulder Police Chief Maris Herold identified Alissa, and confirmed he had been taken to hospital for treatment. Alissa was in stable condition, and got moved to Boulder County Jail today.

“I want to say to the community, I am so sorry this incident happened,” a visibly emotional Chief Herold said.

“We are going to do everything in our power to make sure this suspect has a thorough trial and we do a thorough investigation.”

Investigators have spoken to Alissa but have yet to establish a motive for the attack.

“It’s tragic. This officer had seven children, aged five to 18,” she said of her fallen colleague, whom she described as “a very kind man”.

“I just had that officer’s whole family in my office two weeks ago to give him an award. And so it is personal.

“This is my community, I live here. And to have something like this happen so close to where you live, and to know the fear in the community, and to know that the officers sacrifice themselves, it’s heartbreaking.

“He didn’t have to go into policing. He had a profession before this, but he felt a higher calling. And he loved this community. And he was everything that policing deserves and needs. He cared about this community.

“He was willing to die to protect others.”

President Joe Biden addressed the shooting in remarks at the White House this afternoon. He said he had been briefed on the incident by Attorney-General Merrick Garland and FBI Director Christopher Wray.

“There’s still a great deal we don’t know about the killer, and about the motivation of the killer, and other critical aspects of this mass shooting,” Mr Biden said, stressing to reporters that he was not going to “speculate” about those things.

“But I do know this. As President, I can use all the resources at my disposal to keep the American people safe.

“At this moment, a great deal remains unknown. But three things are certain. First, 10 lives have been lost, and more families have been shattered by gun violence.

“Jill and I are devastated. And I can’t imagine how the families are feeling. The victims whose futures were stolen from them, from their families, from their loved ones, who now have to struggle to go on.

“The second point I want to make is my deepest thanks to the heroic police and other first responders who acted so quickly to address the situation and keep members of their community safe.”

“Every time an officer walks out of his or her home, and pins that badge on, the family member that they just said goodbye to wonders, subconsciously, whether they’ll get that call. The call that his wife got,” he said.

“He thought he’d be coming home to his family and seven children. But when the moment to act came, Officer Talley did not hesitate in his duty, making the ultimate sacrifice in his effort to save lives. That’s the definition of an American hero.”

Finally, he turned to the issue of gun control.

“Thirdly, I want to be very clear – this is the one thing I do know enough to say on – while we’re still waiting for more information regarding the shooter, his motive, the weapons he used, I don’t need to wait another minute, let alone an hour, to take common sense steps that will save lives in the future, and urge my colleagues in the Senate and House to act,” the President said.

“We can ban assault weapons and high capacity magazines in this country once again. I got that done when I was a senator, it passed, it was a law, and it brought down these mass killings. We should do it again.

“We can close the loopholes in our background check system. That’s one of the best tools we have right now to prevent gun violence.

“These are bills that received both Republican and Democratic votes in the House. It should not be a partisan issue. This is an American issue. It will save lives, and we have to act.

“I’ll have much more to say as we learn more, but I wanted to be clear. Those poor folks who died left behind families, it leaves a big hole in their hearts. And we can save lives.”

“Ten people going about their day, living their lives, not bothering anybody. A police officer who was performing his duties with great courage and heroism.

“In addition to grief, we are also feeling a deep, familiar outrage that we as a nation continue to tolerate these kinds of random, senseless acts day in and day out without taking any significant action,” Mr Obama said.

“In so many ways, our lives may soon start to return to normal after a long, difficult year filled with so much loss. But in a normal life, we should be able to buy groceries without fear. We should be able to go to school, or go out with our friends, or worship together, without mentally planning our escape if someone shows up with a gun.

“We should be able to live our lives without wondering if the next trip outside our home could be our last.

“It is long past time for those with the power to fight this epidemic of gun violence to do so. It will take time to root out the disaffection, racism and misogyny that fuels so many of these senseless acts of violence.

“But we can make it harder for those with hate in their hearts to buy weapons of war. We can overcome opposition by cowardly politicians and the pressure of a gun lobby that opposes any limit on the ability of anyone to assemble and arsenal. We can, and we must.

“A once-in-a-century pandemic cannot be the only thing that slows mass shootings in this country. We shouldn’t have to choose between one type of tragedy and another. It’s time for leaders everywhere to listen to the American people when they say enough is enough.”

If Democrats in the Senate do attempt to act on the legislation Mr Biden mentioned, they will need at least 60 votes to overcome the filibuster, a parliamentary procedure through which opponents could prevent the bills from moving forward.

That means they will require 10 Republican votes in addition to the 50 they control.

The violence in Boulder was America’s seventh mass shooting in seven days.

On March 16, eight people were killed as a gunman attacked a series of spas in Atlanta, Georgia.

The next day, five people were injured in a drive-by shooting in Stockton, California.

On March 18, four people were shot and taken to hospital in Gresham, Oregon.

On March 20, five people were shot at a club in Houston, Texas.

The same day, eight people were shot in Dallas, resulting in one death.

And a shooting at a party in Philadelphia, also on March 20, killed one person and injured five more.

Prince Harry has landed a new job with a Silicon Valley company after complaining he had been cut off financially from the Royal Family. The moment a gunman opened fire on shoppers at a US supermarket and killed 10 people was livestreamed by a witness, new reports claim.