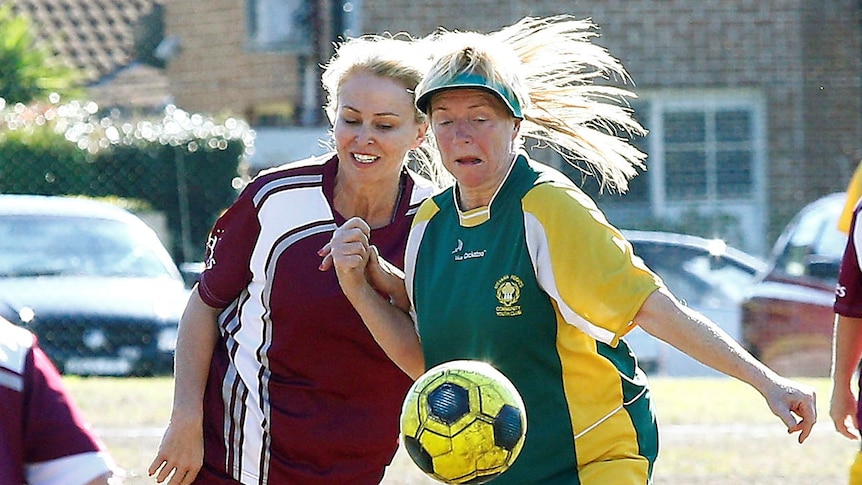 Australia’s golden era of woman’s football is turning platinum as our Matildas stars continue to soar in Europe’s top-flight leagues.

Sam Kerr’s 14th goal for Chelsea in the Women’s Super League (WSL) this weekend has placed the Matildas captain in contention for the league’s golden boot.

Meanwhile, Haley Raso scored a hat-trick for Everton and Caitlin Foord slotted her 10th goal for Arsenal in her debut season, ensuring our Matildas are regularly making global headlines.

But there is another league of golden girls waltzing our local football fields, such as Carol Askew from Sylvania Heights FC and IIdi Vukovich from Pittwater RSL FC.

At 73, Askew is the oldest registered female footballer in Australia.

“How do I reflect on it?

“Well, I’ve been fortunate to have such a fantastic time playing soccer so that’s why I’m still playing,” she said.

Both Askew and Vukovich, who turns 65 in May, are about to kick off their 2021 seasons in the Over 39s Women’s competition for their local football clubs.

From capacity crowds to an FA ban The Dick, Kerr Ladies football team attracted 53,000 fans to Everton’s Goodison Park on Boxing Day 1920. But instead of being used as proof of women’s football’s popularity, it turned out to be the beginning of the end.

“I wasn’t allowed to play when I was little, my father wouldn’t let me and there weren’t the same opportunities there are now,” Vukovich said.

Despite that, as the daughter of Hungarian immigrants, Vukovich grew up knowing only one sport.

The youngest of five children, Vukovich, regularly played in the family corridor with her siblings and frequently attended National Soccer League (NSL) matches.

But she didn’t start playing competitively until she was in her 40s.

When Vukovich’s husband passed away, football helped her deal with the grief.

“He was very sick and was only 49 [years old] when he passed away,” Vukovich said.

“With two teenage children, I was just trying to survive.”

For 90 minutes every week, she would find solace on the pitch.

“You’re not emotionally able to do things well and sleep wasn’t good.

“But for an hour and a half, the only thing I focused on was the round ball,” Vukovich said.

She started playing in the 1980s after her then-husband signed her up.

“I thought ‘oh my god, here I go’ but it has been fantastic,” Askew said.

“I’m having such a good time.”

A solicitor for the Department of Communities and Justice, Askew said playing football helped her cope with the high demands of her job.

“It clears all those cobwebs and issues,” she said.

Askew even took an eight-year break from the sport when she relocated to Broken Hill for work.

Upon returning to Sydney in 2002, she found a flyer in her letter box from Sylvania Heights FC.

“I rang them up and asked if I was too old to play? They said ‘No!'” Askew said.

Not just for the elite

When Askew began her amateur football career, Moya Dodd was playing for the Matildas in the 80s.

She later joined FIFA’s executive committee (2013-2017) and in 2018 was named the seventh most-powerful woman in international sport, outside the United States, by Forbes magazine.

Dodd regarded the likes of Askew and Vukovich as trailblazers, just as much as the women’s national team.

“It’s very easy to think that football means people playing at the highest level, well that’s only a fraction of it,” said Dodd, who has also returned to playing park football.

“Football means the 65 or 73-year-old playing in an over-40s tournament, it means little kids and people of all abilities playing.

“You often think sport is a thing you do when you’re a kid or young adult but it’s actually something you can do your whole life.”

With football the biggest global sport, Dodd viewed the 2023 Women’s World Cup, which Australia is co-hosting with New Zealand, as an opportunity to reach out to all parts of the community and tackle a range of social issues such as social inequality and racial discrimination.

“I would love a world cup that’s not just for the elite but everyone,” she said.

“The feeling Sam Kerr gets when she scores a goal, that feeling’s the same regardless of your level of ability or who you’re playing.”

In the meantime, Vukovich and Askew are kicking goals of their own.

“I recently had a bone density test and the doctor was amazed at how good the results were,” Askew said.

“I seem to be much more agile than people my age and my blood pressure is good.”

Vukovich’s love of the beautiful game has been passed on to her children; she’s played in a mother-daughter team, with her son as the coach.

“We had a very successful year as a family, where we won the competition,” she said proudly.

Vukovich also played in a mixed futsal team with her son and competed at the 2013 World Masters in the Italian city of Turin.

“For someone who plays Sunday soccer, you feel like you’re a football star,” said Vukovich,

“You exercise, look after your diet.

“It’s all about the game but it’s also fun”.

Vukovich hoped to one day compete at another World Masters but for now she’s happy representing her local club.

“I’d like to think I could continue for a lot longer.

“But, like with anything, you have to be up for the challenge physically and mentally,” she added.

Askew also had no intention of hanging up the boots.

“I want to keep playing, until I can’t,” she said.

“I’m having such a great time; I don’t intend to give up.”