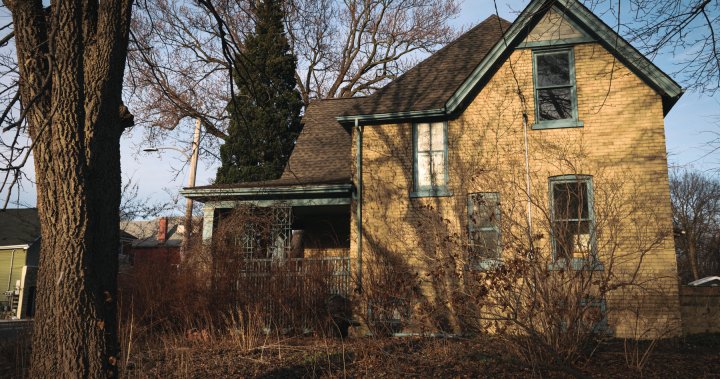 A heritage-designated home that long made local headlines will soon be demolished as London, Ont., makes way for a long-awaited construction project nearby.

City councillors voted on Tuesday for a change of course on plans for the home that sits on the expropriated land of 100 Stanley St.

In 2017, former owner Nan Finlayson launched a battle against the expropriation, which drew to a close in 2020 when the Londoner received a $500,000 settlement from the city.

The project aims to reduce congestion and collisions in the area, along with eliminating issues caused by the bottleneck that tends to form at the intersection.

To make room for the upcoming project, city staff looked into relocating the home at 100 Stanley St., but a report published in early March revealed the cost of doing so had ballooned to a range between $900,000 and $1.1 million — or about $500,000 more than the originally anticipated price tag.

When the increased cost was discussed at the civic works committee, Mayor Ed Holder motioned instead to demolish the home in an effort to save money.

The motion was shot down at the committee level, before it was revived by Ward 10 Coun. Paul Van Meerbergen at council’s meeting on Tuesday.

In a new memo from city engineer Kelly Scherr intended for Tuesday’s meeting, city staff estimated that relocating it would cost up to $1.1 million more than demolishing it, even with the anticipated revenue from selling the relocated home.

Despite the estimated financial savings, the memo added that demolition runs a greater risk for delays, due to the need for a new approval from the province, along with anticipated objections from the public.

“While staff are certainly not keen to spend this sort of money on the relocation, I do believe the best path ahead of us for cost and risk is to continue to pursue the relocation of this residence,” Scherr told council on Tuesday.

“I also am concerned on the impact of a number of other key north-south corridor projects, namely Wellington Gateway and the Ridout Street Bridge, that are contingent on the scheduling of this continuing as planned.”

Councillors opposed to the demolition expressed concern that the risks associated with it outweigh the estimated financial savings of choosing not to relocate.

“The risk of delaying has got money consequences and also real-world impacts in terms of businesses having to come up with a new schedule. There’s new uncertainties introduced. I don’t think that’s worth it,” said Ward 4 Coun. Jesse Helmer.

“The risk for delays, the risk for added costs, the risk to affect other really, really important transportation projects in the city is too great,” added Ward 5 Coun. Maureen Cassidy.

Ward 6 Coun. Phil Squire responded to the talk of risks by expressing concern for the lack of guarantees for the outcomes of either option.

“If I was in a courtroom right now, I think the judge would be jumping up and down saying, ‘there’s a lot of speculation about what might happen or did happen or could happen, and not a lot of facts’,” Squire said.

“What happens when we do move this house?” Ward 8 Coun. Steve Lehman said, expressing concerns for the risks associated with relocation.

Holder, who first introduced the demolition motion at committee, told council he’s confident that city staff will be able to mitigate the risks associated with demolishing.

“In the communications that I have received from across the city, citizens are quite disturbed by the amount this has grown to and have recommended that council reject the relocation, primarily because of the price,” the mayor said.

The motion passed narrowly with a vote of 8-7.

1:56Push to save historic University of Alberta ring houses continues

Push to save historic University of Alberta ring houses continues