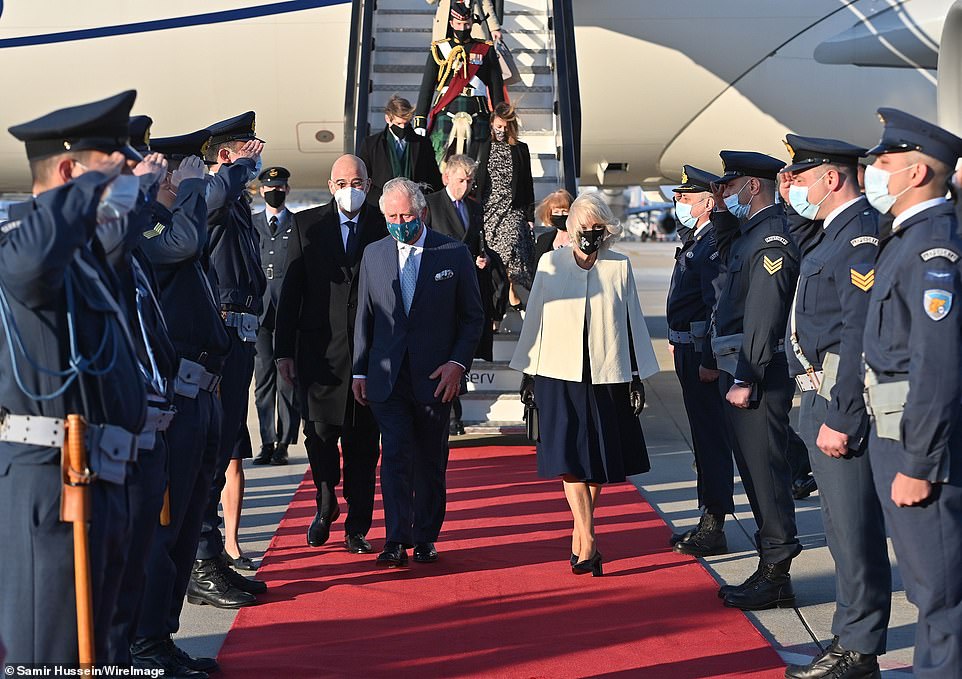 By Rory Tingle For Mailonline

The Prince of Wales and Duchess of Cornwall have arrived in Greece for an official two-day visit.

Charles and Camilla landed at Athens International Airport at just before 5.30pm local time, and were greeted by

After disembarking the plane, Charles and Camilla were greeted by Her Majesty’s Ambassador to Greece Kate Smith.

A guard provided by the Hellenic Armed Forces lined the red carpet for the arrival.

Camilla is wearing a blue and white dress by Fiona Clare, a cape by Anna Valentine, and a face mask with Prince of Wales feathers sent to her by a member of the public. 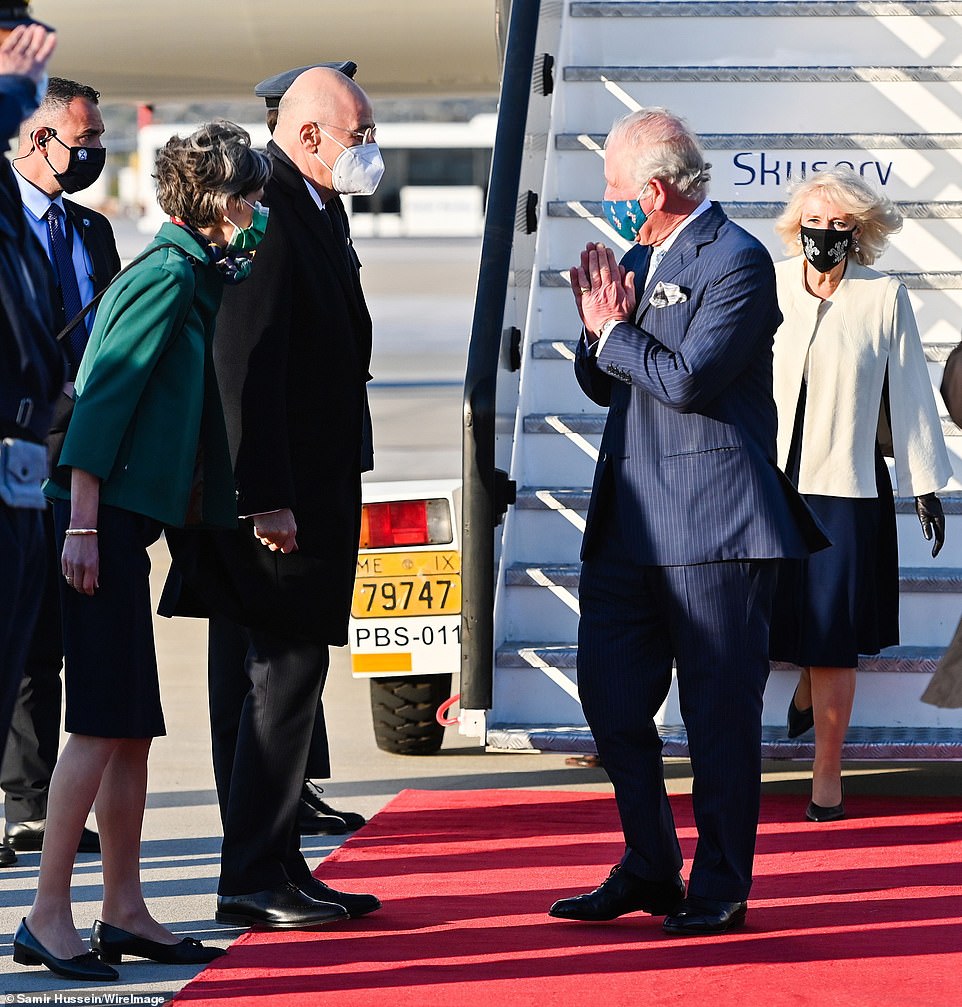 After disembarking the plane, Charles and Camilla greeted dignitaries, including Her Majesty’s Ambassador to Greece Kate Smith

The couple will visit the National Gallery and attend an official state dinner at the presidential mansion where Charles will give a speech to mark the 200-year anniversary.

At the official ceremony celebrating the opening of the National Gallery, Charles and Camilla are expected to be greeted by Mr Mitsotakis and his wife Mareva Grabowski-Mitsotaki.

They will be given a tour by the director of the National Gallery, Professor Marina Lambraki-Plaka, in which they will view the paintings of British artists Thomas Gordon and Frank Abney Hastings.

At the dinner, Charles is expected to say: ‘Your Excellency – today, as in 1821, Greece can count on her friends in the United Kingdom.

‘The ties between us are strong and vital, and make a profound difference to our shared prosperity and security.

‘Just as our histories are closely bound together, so too are our futures.’

Charles and Camilla are expected to be seated at the high table for the official state dinner, hosted by the President of the Hellenic Republic Katerina Sakellaropoulou.

On Thursday, the couple will attend a wreath laying at the Memorial of the Unknown Soldier and watch the Independence Day Military Parade which marks Greece’s uprising against the Ottoman Empire in 1821.

In previous years, thousands of people waving Greek flags have lined the main streets of central Athens to watch the March 25 parade.

The couple have already travelled overseas during the Covid-19 pandemic, visiting Germany in November for a brief two-day trip to attend commemorations marking the country’s National Day of Mourning.

Clarence House announced the visit to Athens last week in a statement which said: ‘At the request of the British Government, Their Royal Highnesses the Prince of Wales and the Duchess of Cornwall will attend the Bicentenary Independence Day celebrations in Athens from March 24-25.

‘This follows an invitation from the prime minister of Greece, Mr Kyriakos Mitsotakis.

‘The Bicentenary Event’s Independence Day celebrations will take place from the evening of Wednesday March 24 and will conclude on Thursday March 25.’

Last July, Charles said he hoped to visit Greece again after the pandemic.

In an opinion piece for Ta Nea, a daily newspaper in the country, he sent his ‘heartfelt wishes to the people of Greece at this very difficult time’.

He added: ‘The resilience of Greece and her people has been tested before, and I hope that the country will once again emerge with renewed vigour and optimism.

‘When that moment comes and the world has made its way through this challenging time, my wife and I do so hope to visit Greece and to see you all again.

‘Until we meet again.’

Charles described Greece as ‘the land of my grandfather’ and recalled how his first visit there more than five decades ago had left a ‘vivid impression’ on him.